More and more Americans have to take retirement savings into their own hands. And that's not necessarily a good thing for them.

There was a time when pensions weren't an anomaly, but rather the norm. If you worked hard and stuck with the same company your entire career, you stood a pretty good chance of retiring in a financially comfortable state. But there's a reason why pensions have all but gone away, leaving employees to scrape together whatever savings they can for retirement, and it boils down to money -- lots and lots of money. 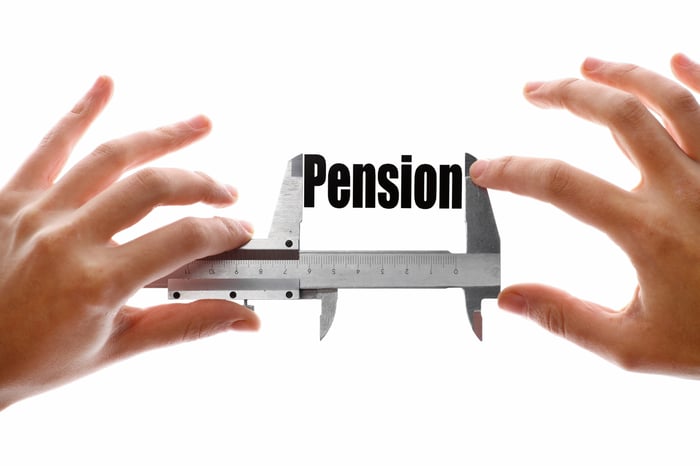 You may know it better as a pension, but a defined benefit plan is one where an employer basically guarantees an employee a certain monetary benefit upon retirement. That benefit might last a certain number of years, or for the rest of the employee's life, and it's typically based on factors such as salary and length of employment.

With a defined benefit plan, the employer is responsible for ensuring that there's enough money to pay those benefits as promised, and any investment risk that's taken on in the process falls on the employer. More on that in a minute.

Defined contribution plans, by contrast, are what companies tend to offer today, the most common of which is the 401(k). With a 401(k) plan, it's up to individual employees to allocate a portion of their earnings to retirement savings. From there, employees are left to decide how to invest that money, which means that any and all investment risk is borne by them alone.

Because defined benefit plans require a mix of in-depth actuarial projections and insurance guarantees, today's employers find them undesirable, at best, and cost-prohibitive, at worst. Defined contribution plans, however, are less expensive for employers -- especially since the administrative fees behind them are often absorbed by the employees who participate.

An unbelievably costly mistake -- for employers

According to the Basel Committee on Banking Supervision, each additional year of life expectancy above an initial projection adds a good 3% to 4% to the present value of the liabilities of a typical defined benefit plan. On a global level, pension-related longevity risk exposure is as high as $25 trillion. In other words, if all the companies out there that issued pensions were to actually make good on their promises, they'd risk coming up $25 trillion short.

To combat this problem, many companies with pensions already in place have stopped offering them to new employees. Some have halted accruals on existing plans to minimize their risk. Most, however, are skirting the issue by not offering defined benefit plans in the first place.

Not just a recent trend

The notable absence of pensions in the workforce is by no means a new development. According to the Bureau of Labor Statistics, between 1980 and 2008, the proportion of employees participating in defined benefit plans fell from 38% to 20%, while the percentage of employees covered by defined contribution plans grew significantly. Furthermore, back in 1998, 60% of Fortune 500 companies offered defined benefit plans to new hires; but by the end of 2013, that figure dropped to just 24%.

There are several major problems with the prevalence of defined contribution plans. For one thing, employees often struggle to come up with the money to contribute. Currently, an estimated one out of every three Americans has no retirement savings whatsoever.

Furthermore, because defined contribution plans give employees autonomy over their investments, most participants are put in a position where they're forced to make investment choices they're not trained to do -- not to mention the fact that 401(k) plans tend to offer limited investment options to begin with. Additionally, because it's up to individual employees to accumulate enough savings to beat inflation, many are forced to rely on the stock market -- a somewhat risky prospect – to sufficiently grow their balances.

Unfortunately, it doesn't look like pensions will be making a comeback anytime soon, so if you're hoping to retire in a reasonably comfortable fashion, your best bet is to start saving early, get some investment advice from a trusted source, and take advantage of any 401(k) match your employer offers. For better or worse, your financial future is most likely now in your own hands. If you make it a priority from the get-go, you stand a much greater chance of coming out ahead.