For well over a year, Total SA's (NYSE:TOT) results have declined with the downturn in oil and gas prices, but along the way the company continued to show that it was setting itself up well for the future as it cut costs. This quarter, those efforts started to pay off as oil and gas prices started to rise. Let's take a quick look at the numbers as well as what Total plans to do now that it appears the worst is over for the oil giant.

Compared to this time last year, Total's results don't look that great, but that should be expected in some ways. A year ago, the company's average realized price per barrel of oil was $58, while this quarter it was a more modest $43 per barrel. It's also worth noting that in the second quarter of 2015, Total had one of the most favorable environments for its refining and chemical segments in over a decade. The European Refining Margin Index at that time was $54.1 per ton of product, compared to a more average rate of $35 per ton this quarter. Here's a quick look at how the company's earnings broke down based on its business segments. 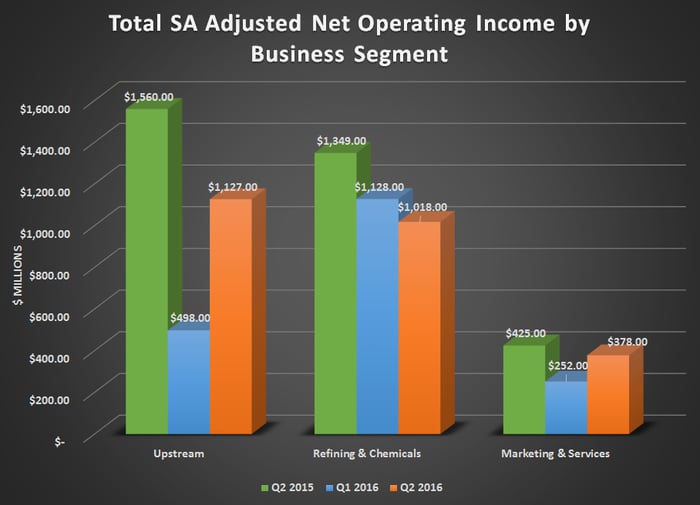 One thing that goes a little understated in these results is the efforts the company has made to cut costs and remain profitable in this lower commodity price environment. When BP (NYSE:BP) reported its earnings earlier this week, the company's upstream production segment netted a $109 million loss even though its price realization per barrel of oil equivalent ($30.63) was just barely lower than Total's ($33.00).

Total's big priority over the past couple of years has been getting its cost structure under control. CEO Patrick Pouyanne went out of his way to highlight both the company's efforts to cut costs and capital spending:

Although still volatile, the Brent price has recovered since the start of the year and has averaged $46 per barrel in the second quarter 2016. Total captured the benefit of this rebound, and adjusted net income rose to $2.2 billion...Efforts to reduce operating costs are continuing to bear fruit and we will surpass the $2.4 billion cost reduction target for this year. In the first half, organic investments were $8.7 billion and are expected to be $18 billion to $19 billion for the year.

Total expects two more major start-ups in the rest of the year: Incahuasi in Bolivia and the long overdue Kashagan project in Kazakhstan. These two start-ups along with the continued ramp up of the other recent additions should increase production for the company by 4% this year.

The earnings results from Total are showing a company that is starting to turn the corner. Upstream production earnings are increasing with oil prices and operational costs are still coming down. Refining and chemical manufacturing was down a bit but still produced respectable results. We're probably a long way from the company's gas, renewables and power segment generating significant earnings results, but it's becoming enough of a business that investors will want to start watching how it performs.