The manufacturer of industrial gas infrastructure and processing equipment reported a bigger profit than Wall Street was expecting, as efforts to cut costs to ride out the energy downturn appear to be paying off.

What: Shares of Chart Industries, Inc. (GTLS 3.48%) are up 10.3% at 1:25 p.m. EDT on July 28, following release of the company's second-quarter financial report before market open. After today's gain, that puts shares of Chart up nearly 64% since the start of 2016, and they have more than doubled since bottoming out in late January: 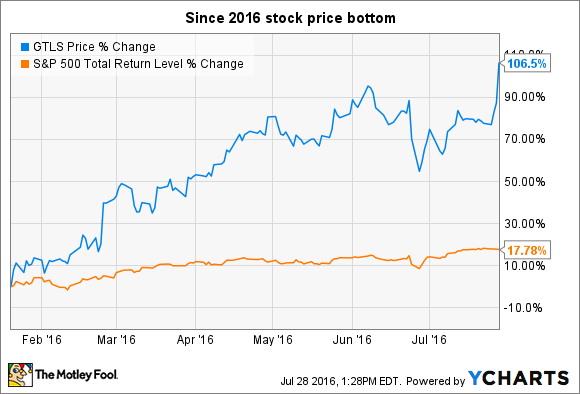 Now what: For context, Chart reported a net loss of $4.7 million in the first quarter, after losing $203 million in fiscal 2015; this followed $250 million in non-cash impairment charges, as the company worked to restructure its balance sheet and asset base.

The bottom line: Chart, like many companies with exposure to the energy industry, has struggled over the past couple of years. But this has been more a case of delayed growth prospects and some necessary downsizing as the downturn plays out, and Chart has never really been a company at risk. Management has made some tough decisions to shutter production facilities and cut jobs over the past year, but the results this quarter indicate that the company may have turned a corner because of those moves, which both position Chart for the current environment and improve efficiencies for an eventual recovery.

Stay tuned for a more in-depth look at Chart's second-quarter earnings report in the next few days.