The company had some slip-ups from commodity prices, but new projects coming on line have more than made up for it.

You certainly can't fault Enterprise Products Partners (EPD -1.47%) for being inconsistent. This past quarter, the company kept its streak of distribution raises alive while retaining excess cash to reinvest in the business. What is even more surprising about this streak is that the company's results have barely missed a beat during the current commodity downturn. Let's take a look at Enterprise's most recent results and see how the company has held its serve throughout this long downturn in the oil and gas market.

The trends that we have seen over the past couple of quarters played out in the second quarter as well. Lower commodity prices and lower volumes in certain segments have been offset by new projects coming on line and the associated fees with those businesses. Again, it was by no means a great quarter, but Enterprise's ability to generate cash flow at steady rates in the current market is a testament to the company's strengths. Here's a breakdown of the company's results by business segment. 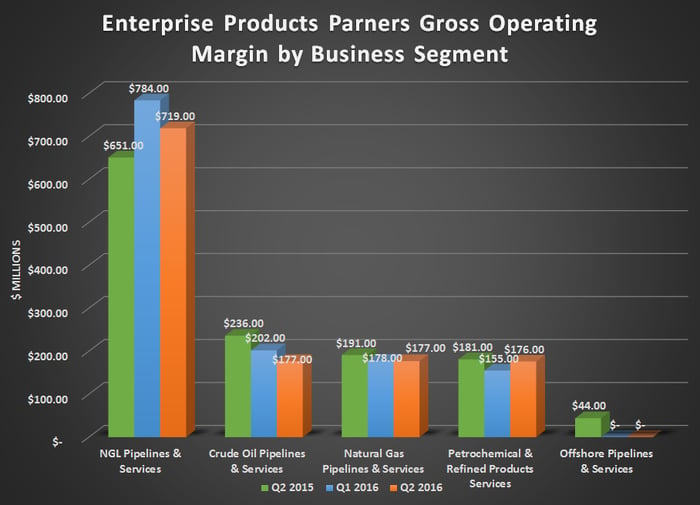 This will likely be the last quarter where we will get results from Enterprise's offshore pipelines and services business. The entity was sold in the third quarter of last year, and the company has discontinued its operations.

What happened with Enterprise Products Partners this past quarter

The statements from Enterprise CEO James Teague in press releases and conference calls rarely contain surprises. This quarter, though, if you do a little digging, there is one detail that pops out. (I've bolded the part of note.)

Enterprise reported record onshore liquid pipeline volumes and marine terminal volumes in the second quarter of 2016, which led to a 5.3 percent increase in distributable cash flow to $1.0 billion and provided 1.2 times coverage of the distribution to partners declared for the second quarter. Volume growth was primarily driven by the expansion of our LPG marine terminal, the ramp up of contracted volumes on our Aegis and ATEX ethane pipelines, the acquisition of EFS Midstream, as well as higher volumes on the Mid-America, Seminole and TE Products pipeline systems. The increase in gross operating margin from our fee-based businesses largely offset lower earnings from our commodity- sensitive businesses, the impact of lower crude oil pipeline volumes and the divestiture of our offshore Gulf of Mexico business in July 2015. ... We are on schedule to complete and begin commercial service on another $1.4 billion of growth projects during the remainder of 2016, including our ethane export facility on the Houston Ship Channel and the Waha natural gas processing plant in the Delaware Basin. In addition, we have $5.2 billion of growth capital projects scheduled to be completed in 2017 and 2018.

Here's what really stands out in this statement. Just last quarter, the company said that it had $4.2 billion in new projects slated to come on line through 2017 and 2018. So if we include the $600 million that were brought into service in the prior quarter, that means the company has added another $1.6 billion in new projects during the most recent quarter alone. This is pretty promising for investors, considering that other larger pipeline companies have actually been trimming or pushing back their project schedules.

Even though commodity prices are still low and some customers are using Enterprise's services a little less, the company has been able to maintain a steady growth pace throughout this downturn thanks to a stream of new projects coming on line. By the looks of it, the company will continue this trend at least into 2018 based on management's statements. Also, if oil and gas prices were to pick up somewhat, Enterprise could be in store for some strong results.

Tyler Crowe owns shares of Enterprise Products Partners. You can follow him at Fool.com or on Twitter @TylerCroweFool.

The Motley Fool recommends Enterprise Products Partners. We Fools may not all hold the same opinions, but we all believe that considering a diverse range of insights makes us better investors. The Motley Fool has a disclosure policy.