Demand for rigs continued to fall last quarter, but this is looking like it's the bottom.

Even well-run companies occasionally run into an operating environment that will really test their ability to generate profits. It would seem the rig market finally found the pain point for Helmerich & Payne (HP -3.51%). After several quarters of fighting off a bad market, the company's earnings finally slipped into a loss this past quarter. Despite the bad news, the company gave reason to hope things will only get better from here.

Let's take a look at the numbers for Helmerich & Panye's most recent quarter to see why it was so bad, and why management is projecting things to improve.

The numbers for this quarter were not promising: Further declines in rig use led to a 16% decline in revenue that translated into the first quarterly loss that didn't involve a large asset writedown in more than 20 years. I can't think of any other way to describe the challenging environment for U.S.-based land rig owners than that statement right there.

If there's anything positive that can be pulled from this quarter, it's that the company is still generating enough operational cash flow -- $122 million this quarter -- to cover its capital spending -- $39 million -- with some left over to pay its dividend.

Even after all cash outlays were paid, Helmerich & Payne ended the quarter with more cash than it started. Today, it has $907 million on the books, which is more than double the amount of long-term debt outstanding for the company. This is important because it suggests the company can continue to weather these bad times while many of its peers have been languishing with operational losses for some time.

If the first calendar quarter was rough for rig operators, this past quarter was even worse. The active rig count continued to decline and pretty much hit its bottom right around the end of the quarter. This quarter was quite possibly the worst quarter for rig activity in the U.S. in over a century. 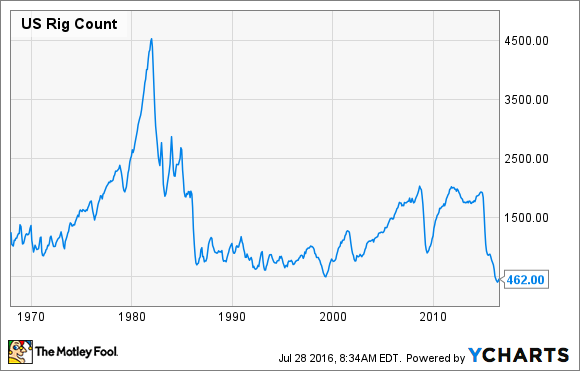 As a result of this bottoming out, Helmerich & Payne's utilization rate for its U.S. land segment dropped to just 24% compared to 47% this time last year, as well as a modest decline in rig margin. The company's smaller offshore and international land rig segments also saw declines in both utilization rates and rig margins.

Despite the decline into the red, CEO John Lindsay was much more focused on what appear to be better times ahead:

Even though oil prices have pulled back over the past several weeks, it is encouraging to still see signs of optimism in the market. In May, the BHI U.S. land rig count troughed at 380 rigs, and has since increased from what everyone hopes was the absolute bottom of this market cycle. Recently, some E&P companies have announced budget increases and rig count additions. It is a positive sign, but many still remain on the sidelines.

This has been an extraordinary downturn and it is having a pervasive effect on every enterprise within the industry. While H&P remains very strong and has been proactive and effective in adjusting to this new environment, the declines in activity levels and spot pricing that we have experienced have significantly impacted our bottom line and the size of our organization. An improving market reverses these two trends, and we believe that we are uniquely positioned to grow market share in the increasingly complex drilling environment that unconventional shale plays will require going forward.

Time will tell whether momentum is truly building in the market; a few data points do not make a trend. However, regardless of the timing, we are making every effort to emerge from this as a stronger Company for customers, employees, and shareholders.

The good news is that things could start to get better from here. For the first time in a while, the company is guiding for greater increases in rig use across the board. The U.S. land rig segment has already put two more rigs to work and expects revenue days to increase 5%-7% for the following quarter. Rig margins will likely be a little lower because some of the new rig contracts have lower contract rates, but getting more rigs in the field will also help to offset fixed costs within the company.

Just as Helmerich & Payne posts its worst earnings result in decades, it looks as though the worst of it seems to be over. Oil prices are climbing in fits and starts, but today, oil prices are in the $45-$50 per barrel range, which is enough to get a couple of producers interested in drilling a few wells. With Helmerich & Payne's balance sheet in great shape and a fleet ready to handle the complex shale drilling jobs, chances are, the company will be able to capture greater market share as the industry rebounds. Hopefully this will be the last time Helmerich & Payne posts a loss for a while.