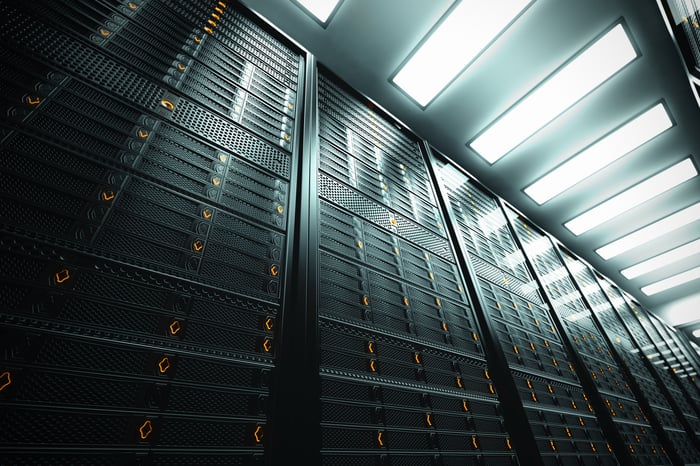 Optical-equipment maker Infinera (NASDAQ:INFN) reported second-quarter earnings on July 27. While the company's results were solid, management is warning that the third quarter is going to be extremely weak, and has issued soft guidance that caught investors off guard. Traders have slammed the company's shares in response to the news, sending them down by more than 30% in early morning trading.

Here's a closer look at the company's second-quarter results and the disappointing guidance that is putting shares under such huge selling pressure.

Infinera's results demonstrated that the company had another successful quarter at executing against its long-term growth plans. Revenue of $259 million came in at the high end of its guidance range and represented a strong 25% growth rate over the year-ago period, though it still marked a deceleration from last quarter's 31% revenue growth rate.

Net income for the period grew by a healthy 20% and came in at $30.9 million. That translated into $0.21 in non-GAAP earnings per share, which represented a growth in the midteens percentage range. That results was significantly better than management's forecast of $0.17.

Management attributed the good results to market-share gains in both its long-haul and metro businesses. Data showed that Infinera's long-haul market share in North America was around 40% as of the end of first quarter, indicating that the company has become the market leader.

During the quarter, Infinera also continued to make progress at improving its margin profile. Non-GAAP gross margin was 50.4%, substantially higher than management's guidance of only 48%. Non-GAAP operating margin also showed improvements and came in at 13.2% for the quarter, which was also well above the 11% that management had projected.

Brad Feller, Infinera's CFO, was pleased with the company's profitability, but he once again warned investors that these higher margins are not yet sustainable, stating, "Despite achieving 50% margins for two quarters in a row, we're not at a point where we can generate margins at this level consistently."

Feller later reaffirmed that the company is still targeting long-term gross margins of 50% and operating margins of 15%.

Tom Fallon, Infinera's CEO, praised the company's quarterly performance but had some difficult news to communicate to investors: "While I am very pleased with our second-quarter and year-to-date financial results, demand is softening in certain areas of our business and we face a difficult near-term revenue outlook."

You can get a sense for just how challenging the upcoming quarter is going to be when you compare the midpoint of management's guidance to last year's results.

A 20% decline in revenue and a wash on the bottom line is an enormous reversal from what investors are used to seeing. In addition, this guidance isn't anywhere close to what analysts were projecting. Prior to this update, consensus third-quarter revenue estimates were running north of $273 million, so this forecast represents an $88 million gap.

Management is blaming the huge revenue decline on a combination of factors. For one, several of Infinera's large customers have recently completed their latest round of network upgrades. This has caused some of them to slow their network equipment spending. Infinera stated that it can normally grow even if one or two of its big customers slow down, but it cannot overcome multiple customers pulling back on their spending all at once.

In addition, management said that it hasn't had as much success with cross-selling its new metro solutions to its current customer base as it had hoped. Last, management believes that some of the company's customers are holding off on spending until Infinera's next-generation system -- the Infinite Capacity Engine -- is finally available.

In response to the tough selling environment, management has decided to implement a series of cost-saving measures, including a companywide hiring freeze and a reduction in discretionary spending. However, management stated that the company is committed to fully funding all of its R&D work so it can bring the Infinite Capacity Engine to market as quickly as possible.

While CEO Fallon is clearly disappointed with the company's forecast, he did his best to reassure investors that Infinera's future remained bright:

Despite the current challenges, I am confident that by continuing to deliver the differentiated technologies and superior service that our customers have come to expect, we will earn significant market share over time across all of the markets that we serve.