JetBlue's unit revenue trajectory is starting to improve after a tough first half of the year.

For most of 2015, shares of JetBlue Airways (JBLU -3.88%) managed to fly high above most other airline stocks. JetBlue posted double-digit revenue growth for the full year due to strong growth in revenue per available seat mile (RASM) in Q1 2015 and flattish RASM through the rest of the year.

Unfortunately, JetBlue's unit revenue performance began to hit turbulence last fall and took a turn for the worse in the first half of 2016. As a result, the stock plunged from a high around $27 last September to a low near $15 late last month. 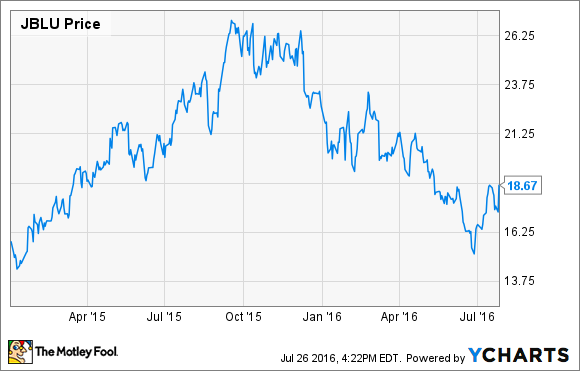 However, JetBlue posted better-than-expected Q2 earnings results this week. Furthermore, the company forecast that unit revenue trends will improve in Q3, contradicting the outlook offered by its largest domestic rival, Southwest Airlines (LUV -4.71%). This was a rare piece of good news for airlines.

JetBlue Airways generated earnings per share of $0.53 last quarter, up about 20% from its EPS of $0.44 a year earlier. This comfortably beat the average analyst estimate of $0.49.

JetBlue's strong earnings performance came despite a steep drop in unit revenue. RASM fell 8.2% year over year, even worse than the roughly 7% decline that management had predicted three months ago.

The primary driver of JetBlue's earnings growth was a 33% decline in the average fuel price it paid, driven by lower market prices for jet fuel and the absence of any hedging losses. But JetBlue also did an impressive job of controlling its non-fuel expenses. Cost per available seat mile, excluding fuel and profit sharing, declined 1% year over year in Q2 -- 1.5 percentage points better than the midpoint of JetBlue's guidance.

The revenue trajectory is improving

Investors got even better news from JetBlue's revenue outlook. The company expects RASM to decrease just 2.5% to 3% in July. That represents a huge improvement from JetBlue's 8.2% Q2 RASM decline. It's even better than the 4.5% decline registered in the month of June.

JetBlue's management did say that unit revenue will probably fall at a faster pace in August and September than in July. However, it still expects the declines to be more moderate than in the second quarter.

By contrast, Southwest Airlines indicated last week that its RASM trajectory will weaken from 0.6% growth in Q2 to a 3% to 4% decline in Q3. About 2.5 percentage points of this sequential weakening comes from lapping the impact of Southwest's new credit card agreement. But even excluding that issue, Southwest expects its unit revenue performance to be 1 to 2 percentage points worse this quarter than it was in Q2.

JetBlue executives suggested during the company's earnings call that the discrepancy may be related to JetBlue's leisure focus. Leisure travel demand has been strong this year, so even with industry capacity up significantly year over year, JetBlue hasn't had to discount much during the summer peak season.

By contrast, Southwest Airlines has increased its appeal to business travelers in recent years. Southwest CEO Gary Kelly noted last week that fares for close-in bookings (typically for business travel) have weakened in the past month.

Whatever the cause, JetBlue's unit revenue trajectory is poised for solid sequential improvement. And while the year-over-year fuel tailwind will be much smaller in Q3 than it was in Q2, it will still be substantial. JetBlue has estimated its Q3 average jet fuel cost at $1.52 per gallon, compared to $1.85 per gallon a year earlier. The actual savings may be greater, as jet fuel prices have fallen significantly since JetBlue made its estimate on July 15.

As a result, there is a good chance that JetBlue will deliver Q3 EPS roughly in line with the $0.58 it earned a year ago. That's better than what analysts have been expecting lately -- and it suggests that JetBlue is set to thrive as industry capacity growth starts to slow later this year.

Why Airline Stocks Are Down Today
358%