This Fool thinks that once channel inventories of older-generation, entry-level NVIDIA graphics cards come down significantly, the graphics specialist will release new entry-level graphics processors based on its newer Pascal architecture.

These graphics cards span a large range of price points, from an affordable $250 with the GTX 1060 to the crazy-expensive $1,200 Titan X. This is a pretty strong lineup, but it's not complete. The company still needs to release fresh products in order to address the $100-$200 price point.

An interesting change over on GeForce.com

This is what NVIDIA said its desktop GeForce GTX lineup looked like as of July 16 on its website, GeForce.com (courtesy of the Internet Archive): 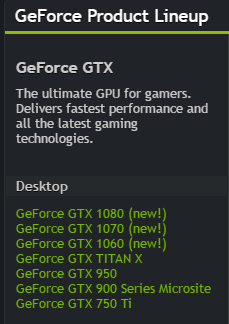 However, NVIDIA just updated GeForce.com and here's what it says its desktop GeForce GTX product stack now looks like: 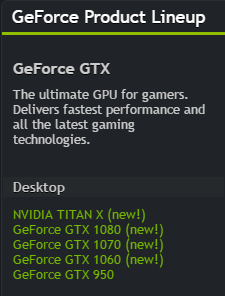 The old GeForce GTX Titan X is now gone, replaced by the recently announced NVIDIA Titan X. More importantly, though, NVIDIA appears to have removed the link to the GeForce GTX 750 Ti. As far as the company's webpage is concerned, the GTX 950 is now the company's lowest-end gaming-oriented graphics card.

I believe that this change may be a hint that the company may be clearing the deck for new entry-level GeForce gaming cards based on the Pascal architecture.

That being said, NVIDIA doesn't operate in a vacuum. The company largely sells these graphics cards through third-party add-in-board vendors that take NVIDIA's graphics processors and mount them onto boards that ultimately get sold to end users.

In order to launch new entry-level cards, NVIDIA needs to be sure that its board partners aren't sitting on a bunch of GTX 950/750 Ti inventories. Additionally, the board partners' customers (i.e., the retail channel) need to draw down inventories as well in order to avoid painful price reductions in order to move the old product.

On Newegg.com, I see many GTX 950 models being offered at prices materially below the $159 launch MSRP for the cards. Additionally, I see several cards being offered with mail-in rebates ranging from $15 to $30 -- a $30 rebate against a card that's being offered at an up-front price $139.99 is quite significant.

I also see many GTX 750 Ti cards on Newegg being offered at low base prices along with mail-in rebates ranging from $20 to $30. Since the GTX 750 Ti cards are already cheaper than the 950 cards off the bat, these rebates are also quite large relative to the cards' base prices.

Ashraf Eassa has no position in any stocks mentioned. The Motley Fool owns shares of and recommends NVIDIA. We Fools may not all hold the same opinions, but we all believe that considering a diverse range of insights makes us better investors. The Motley Fool has a disclosure policy.