The leading staffing company's outlook disappointed investors. What happened and what management said about trading and employment conditions.

Staffing company Robert Half International Inc.'s (RHI -1.86%) second-quarter results deserve closer inspection, having provoked a double-digit decline in the share price after they were reported Tuesday. And employment company earnings are always interesting for the color they give on the state of the economy, so let's take a detailed look at what Robert Half International reported. 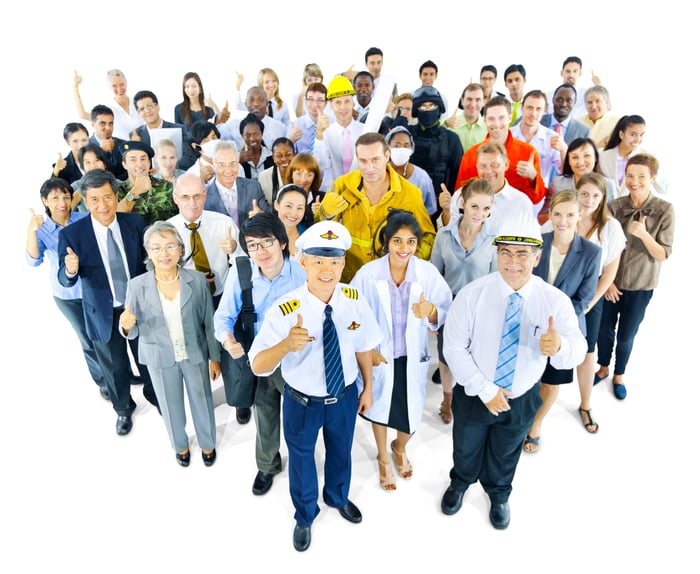 Starting with the headline figures:

With revenue slightly above the midpoint of guidance and earnings within management's projected range, the results look decent enough. However, the guidance and commentary on the earnings call may have spooked investors.

What happened in the second quarter

Moreover, a breakout of growth by region and activity reveals a very interesting dynamic. In typical economic recoveries, permanent placement starts to grow much stronger than temporary placement, as companies start to feel comfortable recruiting staff on a permanent basis again. However, U.S. and international permanent placement had weaker quarters than their temporary counterparts. 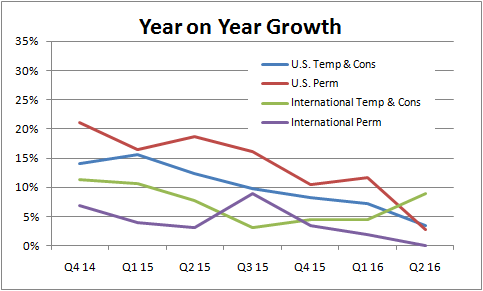 The issues of slowing growth, in particular within permanent staffing, were addressed on the earnings call (transcribed by Seeking Alpha). For example, Waddell discussed client behavior, saying they had gotten more cautious. "I think clients got incrementally more selective. They got incrementally less sense of urgency in doing their hiring. And therefore, Perm didn't get the sequential lift that it traditionally enjoys in the second quarter," he said. http://seekingalpha.com/article/3991848-robert-half-international-rhi-harold-m-messmer-q2-2016-results-earnings-call-transcript?part=single

In addition, Waddell spoke of a "clearly" slowing sales cycle on the permanent staffing side of the business. Clients are deemed to be getting "more selective," and wanting to see more candidates before making a decision. Meanwhile, permanent margins are likely to come under pressure because of conversion to a new CRM and project-management system.

All told, investors will be hoping that the current situation in staffing is the result of some relatively short-term caution in response to a slowing in the global economy, the logic being that if growth expectations stabilize or even increase going forward, then some pent-up hiring will occur, particularly on the permanent side. Alternatively, it could be the beginning of a general slowdown. Time will tell.

Lee Samaha has no position in any stocks mentioned. The Motley Fool owns shares of and recommends Robert Half International. We Fools may not all hold the same opinions, but we all believe that considering a diverse range of insights makes us better investors. The Motley Fool has a disclosure policy.

Why Robert Half Stock Popped 7% on Wednesday

Why Shares of Robert Half International Inc. Tumbled Today
413%