Shares of headhunting firm Robert Half International (RHI 1.39%) closed 7.4% higher on Wednesday, the first trading day after the company announced its fourth-quarter earnings after close of trading on Tuesday.

Robert Half beat analyst estimates for the quarter, reporting $0.95 per share earned on sales of $1.48 billion, versus the $0.91 in profit and $1.46 billion in revenue that analysts had predicted . 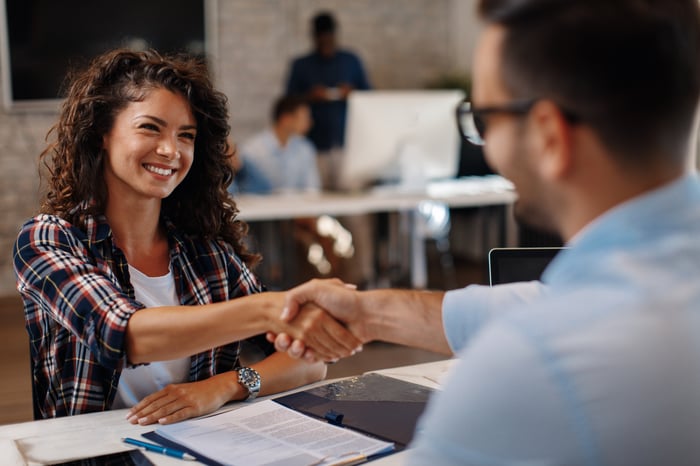 Investors were happy to welcome Robert Half stock to the team today. Image source: Getty Images.

Robert Half's 2018 fourth-quarter income spiked 150% higher in comparison to the prior year's Q4, despite revenue growing only a modest 10%. Last year's earnings had been depressed by one-time charges taken in connection with tax reform.

CEO Harold Messmer noted that the company scored "all-time-high" operating profits and revenue in 2018. For the year, Robert Half reported net income of $3.57 per share on sales of $5.8 billion -- 53% earnings growth on, again, 10% growth in sales.

As for 2019, Messmer noted that "the U.S. labor market remains very robust, with significant demand due to talent shortages across our professional disciplines," which sounds like it should be good for Robert Half's business. The company did not, however, give specific earnings guidance for the present year.

Analysts who follow the company, meanwhile, are predicting Robert Half will earn $3.90 per share on sales of $6.1 billion this year -- 9% better profits than last year, on sales growth of only 5%. If Messmer is right, though, analysts could find themselves surprised once again.

Check out the latest Robert Half International earnings call transcript.

Robert Half International Earnings: The Details

Why Shares of Robert Half International Inc. Tumbled Today