Please ensure Javascript is enabled for purposes of website accessibility
Log In Help Join The Motley Fool
Free Article Join Over 1 Million Premium Members And Get More In-Depth Stock Guidance and Research
By Steve Symington, Jason Hall, and Matthew DiLallo – Jul 28, 2016 at 8:42AM

The oracle of Omaha is a legendary investor. But he's not always right.

If you've read our musings here at The Motley Fool, you probably know we're generally big fans of Warren Buffett. After all, as arguably the world's greatest investor, Buffett espouses many of the Foolish (with a capital F) values for long-term investing that we hold dear.

But he's also humble, and knows all too well even he can be wrong from time to time. Speaking in 2009 of his now-divested purchase of ConocoPhillips shares, for example, Buffett admitted, "[...] I have been dead wrong. Even if prices should rise, moreover, the terrible timing of my purchase has cost Berkshire several billion dollars."

So we asked three of our top contributors to each find one stock about which they believe Warren Buffet is "dead wrong." Read on to see which businesses they chose and why.

One of Buffett's best investments may be going flat

Jason Hall: Let me start by writing this: There's no getting around the fact that Warren Buffett's investment in The Coca-Cola Co (KO 0.10%) has worked out incredibly well for Berkshire Hathaway (BRK.A 0.35%) (BRK.B 0.40%) investors. After all, Berkshire paid less than $1.3 billion for the 400 million shares of Coke that it holds, and they're worth more than $18 billion today.

But that doesn't make Coca-Cola a worthy investment today -- at least not for the average investor. As I've written here and here, I think Coke's best days are behind it, at least when it comes to investors looking for market-crushing returns.

Over the past decade, consumption of carbonated beverages -- still Coke's bread-and-butter even after efforts to expand into other categories -- has begun falling, and people are drinking less Coke and Diet Coke in the company's core markets than they were a decade ago. I think that trend is likely to continue, and could even accelerate faster than Coke can expand its business into growth markets. That's a recipe for less-than-stellar returns, even factoring in Coke's fantastic dividend. 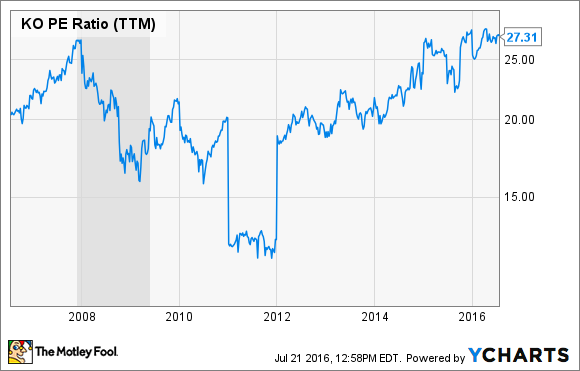 That's right. Coca-Cola shares are more expensive today than anytime since right before the Great Recession. The deck is stacked against Coke being a great investment going forward.

If you're looking for a strong global beverage brand with big growth potential, take a look at Starbucks (SBUX 0.04%), which is still growing revenue near-double digits, profits at an even faster pace, and has an enormous opportunity for years to come.

Buffett is betting the farm a bit too early

Matt DiLallo: Deere & Company (DE 0.90%), the parent company of John Deere, has been serving American farmers since the late 1830s. The farm equipment maker is the type of iconic brand that Warren Buffett loves to own for the long-term. However, unlike Buffett's other iconic brands, John Deere operates in a cyclical industry, which leads to uneven results. In fact, the company's key operating metrics have headed in the wrong direction over the past couple of years: 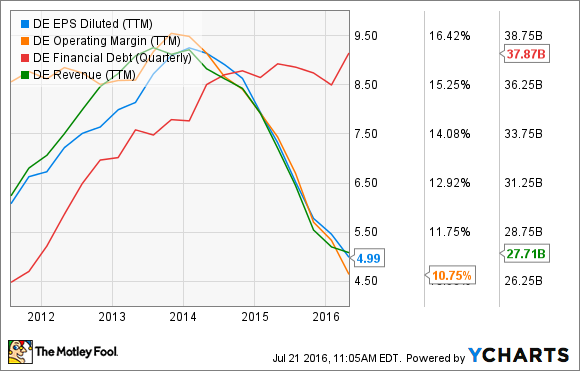 Given the current slump in the farm machinery sector, analysts don't expect Deere's results to improve anytime soon, with analysts expecting a double-digit decline in sales this year followed by flat sales, at best, in 2017. Deere, likewise, sees farm equipment sales slumping 15% to 20% this year.

Despite this weakening outlook, Buffett continues to increase his stake in Deere having already amassed more than 23 million shares. Those shares are currently valued at around $1.9 billion, which equates to a 7.5% stake in the company. It is a big bet that is coming while sales are still slowing down, not into the first signs of improvement, which is when it's best to buy cyclical stocks.

While Buffett's big bet on John Deere could pay off down the road, I think he's very early. Given the outlook, I believe the stock will be under increasing pressure in the short-term as the market bottoms out and pushes its financial metrics further in the wrong direction. That's why I'm personally short shares at the moment, in hopes of profiting from this potential decline.

Steve Symington: At last check, Buffett's Berkshire still owned more than 55 million shares of Wal-Mart Stores (WMT 0.43%) worth nearly $4.1 billion. But given Wal-Mart's already-enormous size and inability to effectively cope with rising competition in the burgeoning e-commerce space, I just can't see the retail industry giant beating the market for the foreseeable future.

Then again, it's also possible Buffett is aware of Wal-Mart's under-performance. Berkshire's most recent 13-F filing in May showed the company sold 949,000 shares of Wal-Mart last quarter -- albeit only reducing its stake by around 1.69% in the process. But if Wal-Mart can't find its footing and start at least keeping pace with the growth of its online competitors, I fear it will be too much to ask of the big-box juggernaut to beat the market over the long term.