When investors are hunting for dividend-paying stocks to provide some pop for their portfolios, they often turn to members of the S&P 500 Dividend Aristocrats. Dividend aristocrats have increased dividends every year for the last 25 consecutive years, but that doesn't necessarily mean every one of these companies belongs in your portfolio. Some of our top Motley Fool contributors think investors should stay on the sidelines on these three dividend aristocrats. Read on to find out why.

Todd Campbell
Although Walgreens Boots Alliance (NASDAQ:WBA) is a global pharmacy goliath with an enviable track record of dividend growth, investors may want to press the pause button on their plans to pick up shares this month.

The company is mired in regulatory challenges relating to its proposed acquisition of Rite-Aid (NYSE:RAD), and with no timeline announced yet for the closure of this deal, investors are left with a bit of uncertainty. After all, Walgreens, CVS Health, and Rite Aid dominate this industry, and who knows just how many stores regulators will want Walgreens to sell before they'll sign off on this combination.

Ultimately, I think this deal will happen, but if it doesn't, then there's no telling what investors will do to Walgreens stock.

That uncertainty is enough to make me wait at least until there's an update on the merger timeline -- perhaps when the company's fiscal third-quarter earnings are released on July 6. Since shares have more than doubled in the past three years, and they're now yielding just 1.86%, I see little reason to take on the risk of buying until there's more clarity.

Neha Chamaria
After ending 2015 as one of three worst-performing Dividend Aristocrats, Archer-Daniels Midland Co. (NYSE:ADM) has bounced back smartly this year, gaining almost 15% year to date. However, that run-up doesn't impress me enough to recommend buying this dividend aristocrat just yet, given the challenges facing ADM.

As a processor and seller of agricultural commodities, ADM has somewhat unpredictable profitability, because the demand and prices of key crops are highly volatile. Last month, ADM reported its weakest quarter in nearly three years, with profits tumbling 53% year over year as an increased global supply of grains hurt exports from the U.S. A stronger dollar added to ADM's woes.

That ADM is only "cautiously optimistic" about the latter half of the year doesn't make things any better. ADM expects an equally weak second quarter for its largest segment, Ag services, which reported 61% lower operating profits in Q1. It also expects a weaker 2016 for its oilseeds processing segment. My concern is that the pain could last longer, as the agricultural sector is going through a rough patch, compelling companies across the board to slash outlooks.

The volatility in ADM's business is unnerving. In fact, that partly explains why the stock has lagged the S&P 500's total returns (including dividends) so dramatically during the past decade. 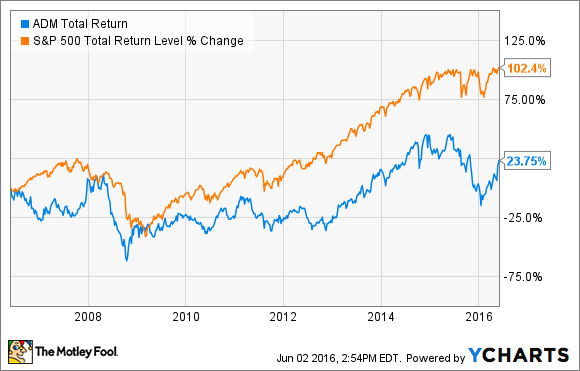 ADM isn't so cheap at current prices, either. At 16 times trailing earnings, the stock is trading above its five-year average P/E and in line with the industry average. At nearly 11 times cash flow, ADM is well above both its five-year average and the industry P/E. I'm not saying ADM isn't a good dividend stock, but there are much better options out there in terms of both dividend yield and dividend growth potential.

Jason Hall
The idea behind shopping on the Dividend Aristocrats list is to invest in dividend growth. However, many investors make the mistake of simply picking out a recognizable dividend blue chip like Coca-Cola (NYSE:KO), often at a time when it's not really a good buy. Here's why I think now is not the best time to buy shares of Coca-Cola, a stock I own myself:

Let's take the second point first. I'm not attempting to call a market correction by any means, but I am unequivocally stating that Coke shares are super expensive today: 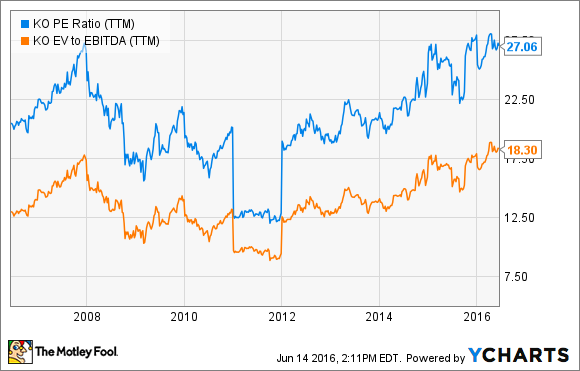 In other words, it's unlikely you'll get strong capital returns on Coke stock by buying it while it's this pricey. And the first bullet point above is a big part of the reason why.

The bottom line is that Coke's bread-and-butter products are in decline. Fewer people are interested in drinking Coke, Diet Coke, or any of the company's other varieties of profitable bubbly sugar-water. This is especially true in younger generations, which are drinking less soda and more coffee, tea, and energy beverages. This is a huge generational shift, and frankly, it's a big indicator that Coke's brand appeal may be less valuable than in prior decades.

Don't get me wrong: Coca-Cola is still a solid company and will likely still be selling soda in 100 years. But its stock is incredibly expensive right now, especially considering the challenges the business faces in a changing consumer landscape.