The distribution and services company had some good news for investors regarding full-year expectations on a key metric.

If there's been one recurring theme in the current earnings season it's that the usual suspects -- heavy machinery, oil and gas, metals and mining -- have been weaker than expected, but other areas of the general industrial activity have stabilized. Such was the case with WESCO International Inc (WCC 0.73%). The company has significant exposure to some of the worst-affected end markets, so under the circumstances its second-quarter results were relatively good, and management had some good news with regard to free cash flow (FCF) guidance. Let's take a closer look. 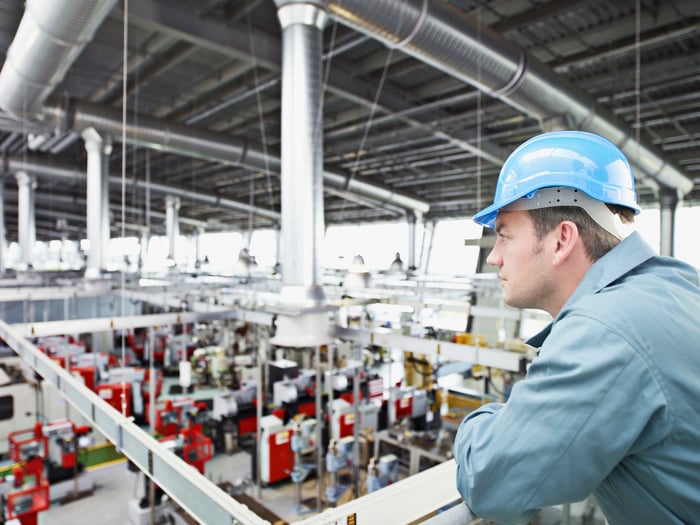 Starting with the headline figures from the second quarter:

In short, sales were better than expected, and free cash flow generation remains strong, even if operating margin was toward the low end of guidance.

Turning to the all-important full-year guidance, it's clear that management sees these operating trends continuing:

Observant readers will note that the full-year EPS guidance range was narrowed, but the midpoint remains the same at $3.975. Despite the increase in sales expectations, and a lower expected tax rate, EPS will remain the same due to lower expected operating margin. That said, FCF expectations were given a boost -- if EPS guidance is the same but FCF conversion is expected to be better, then FCF estimates should be raised. It's not an explicit hike in guidance, but you can read between the lines.

However, analysts were left asking questions about the third-quarter guidance. Given that second-quarter sales only declined 0.3% and first-quarter sales were down only 2%, it's understandable that investors were left puzzled by management's third-quarter expectations for sales to be in the range of negative 3% to flat.

Management discussed third-quarter guidance in the context of current trends, and essentially the issue is that WESCO's largest end market (industrial, representing around 37% of sales) is, according to management, not improving as previously expected -- WESCO's management had hoped for the second-half improvement to be better than the first.

However, the good news is that the other three segments, namely construction (33%), utility (16%), and commercial, institutional and government (14%), or CIG, all generated organic and core sales growth in the quarter. As you can see below, it was a return to core sales growth for the construction end market. 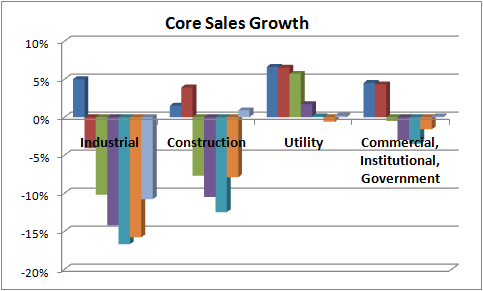 Part of the reason for WESCO's industrial end market woes is related to its heavy exposure to heavy industries (energy, metals, mining, etc). However, construction and utility markets seem better. Similar themes can be seen in the results of other industrial companies such as MSC Industrial, Roper Technologies, and Alcoa.

Investors will be hoping the third-quarter guidance proves conservative, while eagerly awaiting any kind of stabilization/revival in heavy industries. In addition, maintenance, repair and operations, or MRO, spending by its customers can only be curtailed for so long -- management spoke of current MRO spending as being "tightly controlled."

Meanwhile, WESCO International's ongoing execution, particularly with FCF conversion, will hopefully continue to help guide the company through some difficult markets. The company didn't raise EPS guidance, but the implication from the FCF outlook is for a better than previously expected outcome.

Lee Samaha has no position in any stocks mentioned. The Motley Fool owns shares of and recommends MSC Industrial Direct. The Motley Fool recommends Roper Technologies and Wesco International. We Fools may not all hold the same opinions, but we all believe that considering a diverse range of insights makes us better investors. The Motley Fool has a disclosure policy.