The integrated oil and gas giant got some relief from oil prices, but natural gas prices and refining margins took it all away.

Hopefully, investors weren't expecting some sort of miraculous turnaround in ExxonMobil's (XOM -0.35%) results in the second quarter. If they were, they would be very disappointed. There were some promising signs, like higher oil prices, but they weren't enough to offset the other issues plaguing the oil and gas industry right now. Here's a quick recap of ExxonMobil's second-quarter earnings and what investors should probably take away from it.

After ExxonMobil's upstream earnings fell into the loss column in the first quarter, the company saw a modest pickup to a result that was just barely profitable by ExxonMobil's standards. The reason for the gain was mostly the uptick in oil prices, because natural gas prices and overall production actually slipped a bit compared to the first quarter.

The big difference maker this quarter compared to the prior one was the company's downstream results. The company itself didn't have a bad operational quarter when it comes to refining: Its total refinery throughput and product sales were down only very slightly. The big difference was refining margins. There isn't much ExxonMobil can do on this end of things, so it's hard to fault it for posting weaker results in this segment. 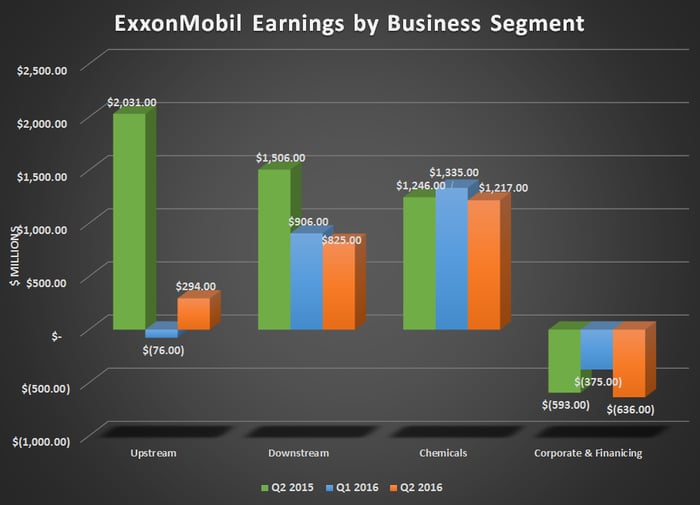 On the cash side of things, the second quarter didn't look that much better. Total cash from operations and asset sales was $5.5 billion, which was enough to cover the company's $5.1 billion in capital spending for the quarter. But in times like these, a company will take any small victory. Still, ExxonMobil has taken out more than $5 billion in debt to fund other aspects of its business, such as its dividend. At the end of the quarter, the company's debt to capital stands at around 17%. We're starting to breach ExxonMobil's target debt-to-capital range of 10%-20%, but the company still boasts a way healthier balance sheet than its integrated oil peers.

ExxonMobil is well-known for having a very tight-lipped management team. Considering the less-than-stellar results the past two quarters, though, you might think that management would open up a little and give more details about how it plans to address some of the bigger concerns that the company's recent results have raised. Instead, CEO Rex Tillerson's statement for the quarter might as well have been a copy-paste from the last dozen earnings releases.

While our financial results reflect a volatile industry environment, ExxonMobil remains focused on business fundamentals, cost discipline and advancing selective new investments across the value chain to extend our competitive advantage. The corporation benefits from scale and integration, which provide the financial flexibility to invest in attractive opportunities and grow long-term shareholder value.

There was some hope that higher oil prices would have a much greater impact on ExxonMobil's earnings for the quarter, but lower natural gas prices kept upstream earnings low while downstream earnings took a turn for the worse. ExxonMobil is probably in the best shape among its peers, but some competitors are showing that decent profits can still be had today. There wasn't anything in this earnings report that should make investors worry about the future prospects of the company, but it didn't exactly instill confidence, either. It will be worth watching what happens in the coming quarters to see if ExxonMobil can make some improvements.

The Motley Fool owns shares of ExxonMobil. We Fools may not all hold the same opinions, but we all believe that considering a diverse range of insights makes us better investors. The Motley Fool has a disclosure policy.