What: Shares of Interactive Intelligence Group (ININ), a provider of software for call centers, soared on Friday after Reuters reported that the company was exploring strategic alternatives, including a potential sale. At 3:30 p.m. ET, the stock was up about 22%.

So what: According to Reuters' sources, the sale process has attracted fellow software companies as well as private equity firms. Interactive Intelligence sported a market capitalization of roughly $1 billion prior to Friday's surge, about 2.5 times its 2015 revenue. The company hasn't reported a GAAP profit since 2013, with an ongoing transition to the cloud partially to blame.

Shares of Interactive Intelligence are still well below peak levels, even after Friday's gains. The stock peaked in early 2014 at around $80 per share, but has slumped since then as profits evaporated. 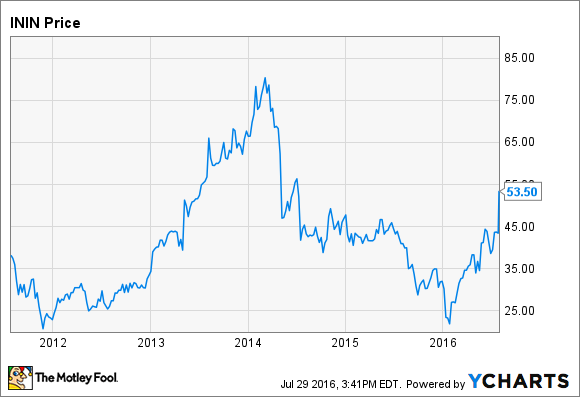 Now what: There has been no confirmation from either Interactive Intelligence or the investment bank the company is reportedly working with that a sale process is taking place. A deal for the company is far from a sure thing at this point, and some alternative arrangement other than an outright sale is still possible. Interactive Intelligence is expected to report its second-quarter earnings after the market close on Monday, and investors may need to wait until then for an update.

For Interactive Intelligence, the Future Gets Cloudier