But the crop nutrient is still in oversupply, and demand remains weak.

China finally signed a contract for potash delivery this year with Belarusian state-producer Belaruskai, but at $219 per metric ton, the price is 30% below last year's and is one that's not been seen in nearly a decade. But it could've been a lot worse, and PotashCorp (POT) even sees this as a sign that that market has reached a bottom.

Potash producers have reported receiving dramatically lower prices on a global basis. PotashCorp, for example, had said its average realized price was just $178 per metric ton in the first quarter, 37% below the $284 it had realized a year ago. Both Mosaic (MOS -0.70%) and Agrium (NYSE: AGU), PotashCorp's partners in Canpotex, the North American marketing organization for potash, also reported lower average selling prices of $207 and $199 per metric ton, respectively. 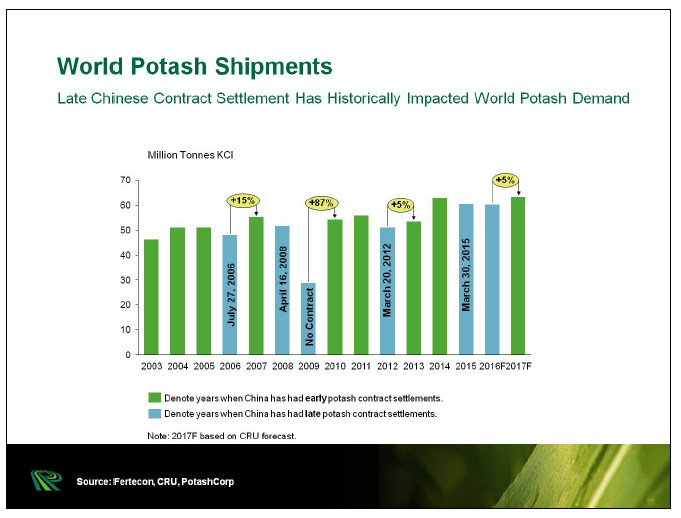 Perhaps, but miners have been digging in for a protracted pricing slump. Mosaic just announced it was putting its Colonsay mine in Saskatchewan into care-and-maintenance mode and laying off 330 workers. That follows PotashCorp's decision earlier this year to similarly suspend operations at its Picadilly mine in New Brunswick, Canada, followed by Intrepid Potash (IPI -0.32%) announcing in May it was idling its Carlsbad, New Mexico, facility. And Canpotex itself said it had cut by 8% potash exports over the first half of 2016.