On the back of yet another expectation-crushing quarter, Facebook (NASDAQ:FB) stock wrapped up the week 2.4% higher, bringing the stock's year-to-date gain to 18.4%.

Who would have guessed when Facebook stock went public in May 2012 at $38 a share that the stock would be trading at $124 just over four years later? After all, the stock's $100 billion market capitalization when it went public was criticized by many as overvalued. But between its $38 share price and its $124 price today, Facebook has posted lots of quarters of huge growth -- quarters like the second quarter it announced this week.

Once again, the social network didn't disappoint when it reported quarterly results on Wednesday.

Here's a closer look at the figures from Q2 that helped convince investors the stock was still worth its price-to-earnings ratio of 76 times earnings.

Going into 2016, Facebook's CFO, David Wehner, warned investors that Facebook's operating expenses would increase sharply during the year as Facebook makes significant investments. The warning may have prompted some investors to prepare for expenses to increase faster than revenue -- a trend that would negatively impact the company's operating margins. Wehner was right. Operating expenses did increase rapidly. Indeed, in the company's most recent quarter, GAAP and non-GAAP combined costs and expenses increased 33% and 47%, respectively. But revenue increased even faster. As a result, between the second quarter of last year and the second quarter of this year, Facebook's GAAP and non-GAAP operating margin increased from 31% to 43% and 55% to 58%, respectively.

Facebook's size certainly isn't slowing it down. Unlike Twitter (NYSE:TWTR), which revealed earlier this week it was still struggling with slow user growth, Facebook's much larger user base is still growing rapidly -- despite the fact that about one in seven people already use the platform every day. 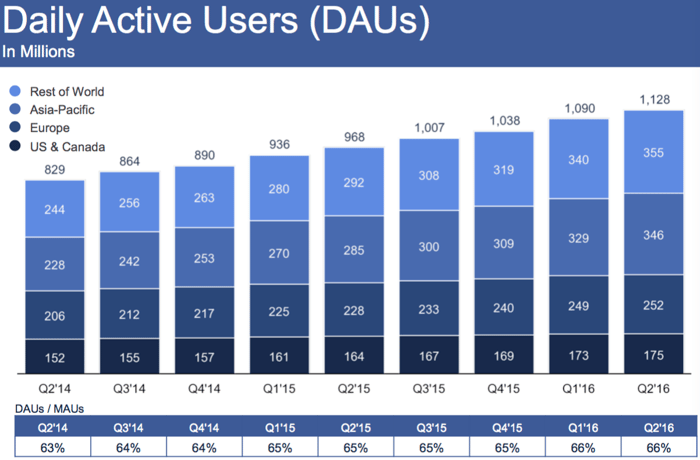 It's fair to say Facebook had a very good quarter. While I'm not a shareholder, I'll forgive the stock's pricey valuation for now. If I owned shares, I wouldn't be selling.