After its earnings meltdown, Twitter needs a new engine worse than ever, if it ever wants to gain ground against Facebook. But is live video the way?

As you can infer, Twitter's second-quarter 2016 earnings results disappointed investors, triggering the customary earnings-fueled sell-off in its shares, adding to what has already proven a trying year for CEO Jack Dorsey and company. To make matters worse, Facebook's (META 2.53%) shares continue to soar on the strength of its increasingly ironclad grip on the social-media marketing world. 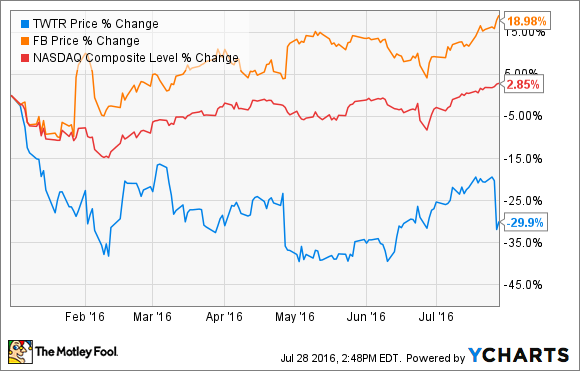 So are things over for good at Twitter? Let's take a look.

In dissecting any company's earnings report, an investor should look for the source of the market's joy or consternation. With Twitter, the cause of its consternation quickly jumps out: weaker-than-expected guidance.

As part of its earnings release, Twitter stated it expected third-quarter sales to range between $590 million and $610 million, which, at the midpoint of its guidance, translates to an increase of just 5.4% versus last year's third quarter. That's an ugly number any way you slice it, and one that justifiably spooked investors. For some extra context, prior to the report the average analyst estimate called for Twitter's Q3 sales to total $678 million, so the company considerably missed those expectations.

In actual Q2 performance, Twitter also came up well short of consensus expectations. The company lost $0.15 per share on sales of $602 million, while Wall Street called for earnings per share of $0.10 from $607 million in revenue.

Perhaps most importantly, Twitter added three million users during the quarter, bringing its total count of monthly active users (MAUs) to 313 million. This 1% sequential user growth is rather anemic -- particularly with the pretense that Twitter remains a growth stock, a tenuous claim at this point. This paltry user growth has called its product strategy into sharper focus: It is imperative that Twitter continues to court new users, in order to strengthen its network and expand its financial footprint.

In recent weeks, Twitter inked a number of live-streaming deals, mostly centered around major sports leagues, to air games and some exclusive content over the service. Though certainly no given, the assumption is that combining Twitter's forum for live discussions with footage of popular events will broaden the appeal of the service to new users.

Conceptually, this seems to hold water. As a relatively tech-savvy consumer, I'm certainly open to the idea of tuning into an NBA or NFL game over Twitter to catch the game and the discussion surrounding it. That's what a lot of users do already, just via two separate screens. Of course, Twitter will need to nail the user experience in order to attract users, but the strategy itself seems plausible enough.

At the same time, Twitter's current suite of deals will more likely serve as case studies on the efficacy of augmenting live programming with Twitter's platform. To truly achieve its desired result, Twitter will need to secure much more live programming catering to audiences outside of sports fans.

However, it also bears noting that Twitter isn't the only social network targeting live programming. Facebook has repeatedly signaled it sees live content as perhaps its most important strategic priority. In fact, Facebook went so far as to alter its Newsfeed algorithm to give live video broadcasts outsized priority when determining content rankings.

Thus far, Facebook hasn't moved headlong into live cable-grade broadcasts, and that might be by design. After its earnings blowout, though, Facebook is undoubtedly the stronger of the two social networks. However, Facebook's strength is more tilted toward social networking among friends, family and peers, while Twitter seems the more optimal place to view and participate in a public discussion.

Either way, it will be fascinating to see: Can Twitter continue to utilize its place as digital town square? Or will it fail to grow beyond its current footprint, likely to its shareholders' dismay?