This article was published on Aug. 1, 2016. For a more recent look at the company now called American Outdoor Brands, click here. And here's a post-election look at the solar sector.

With two of the most disliked candidates in modern history and polls showing an ever-closer race, the presidential election could rock the stock market. The recent Brexit vote was a reminder of how suddenly and severely politics can move markets. And while U.S. stocks have recovered from the crash, the long-term impact of the vote on many industries and companies remains.

In an earlier article, I discussed two stocks that could jump on a Donald Trump victory. While Trump would likely have a volatile effect on the economy and the market, given his calls for protectionist policies and much stricter immigration rules, Clinton would be a more predictable commander in chief. As a Democrat like President Obama, Clinton is likely to continue many of his economic policies, and stocks that have benefited from the Obama administration should continue to thrive under Clinton.

There are two sectors, in particular, that come to mind, because they have flourished, directly or indirectly, under the Obama administration and should do the same under Clinton: guns and solar. Here are two stocks that could get a boost if Clinton makes her way into the Oval Office.

It may seem cynical to point to a gunmaker as a potential winner from a Clinton election, but the threat of gun control legislation under the Obama administration and recent mass shootings have been a relentless driver of gun sales. This has propelled Smith & Wesson Holding Company (NASDAQ:SWBI) and its peer, Sturm, Ruger (NYSE:RGR), higher. 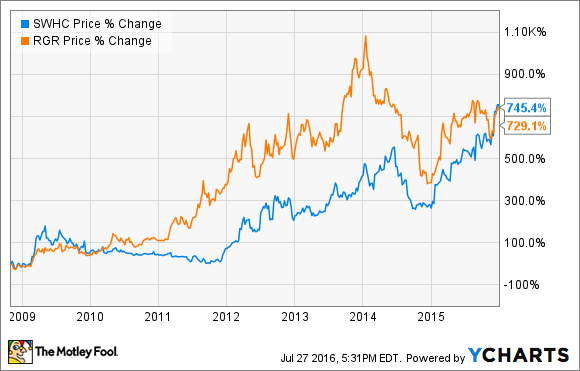 As you can see in the chart above, both stocks have gained more than eight times their value since Obama's election, making them among the best performers in the market during his administration. Notably, gun sales spiked the month Obama was first elected, in January following his reelection, and after the Sandy Hook shooting. They also spiked in December 2015, the month of the San Bernardino shooting and again this June after the attack in Orlando.

Fear of terrorism and stricter gun laws consistently drives Americans to buy more guns. According to the FBI's National Instant Criminal Background Check system, guns are currently selling at a steady rate of approximately 1.2 million a month, double where they were during the Bush administration.

Clinton is a well-known proponent of gun control, dating back to her days as first lady. Recently, she promised to "take on the gun lobby and fight for common sense reforms," and she said gun control was one of her two biggest priorities. Those are the kind of words that will motivate gun owners to add to their collections, and the gun lobby is already claiming she will take Americans' guns away.

Of the two major publicly traded gunmakers, Smith & Wesson has been the stronger performer of late, as its sales have grown faster, though it still has a cheaper valuation than Sturm, Ruger. Smith & Wesson looks like the better pick here, but both stocks are likely to pop if Clinton gets elected.

Government policy can have an outsized influence over the energy industry, and that is especially true with the budding solar sector, where incentives such as tax credits under the Obama administration have given the industry a jump start. Even so, solar still has a lot of growth ahead of it as renewable energy panels have only been installed in about 1% of American homes.

The catch is that a lot of those incentives are set to expire during the coming years. Clinton, however, has promised to extend many of them, setting an ambitious goal of reaching 500 million solar panels by 2020, which would increase U.S. capacity by about five to seven times. Beyond that, Clinton is aiming for enough clean energy to power all U.S. homes by 2027.

Vivint Solar (NYSE:VSLR), the No. 2 installer of residential solar panels in the U.S., would be in a prime position to benefit from an extension in the investment tax credit, which offers a 30% rebate for installations but is set to fall to 10% in 2019 before expiring in 2021. The company's stock has tumbled this year after a failed deal to merge with now-bankrupt SunEdison, but the upside potential is strong if regulatory momentum continues in the industry's favor. Other stocks worth considering are SunPower, SunRun, and SolarCity, which may be absorbed by Tesla Motors by the time the president takes office in 2017.

If Clinton gets elected and is able to extend the credit further, that will surely be a win for Vivint and the solar industry in general.