Beating expectations for the third quarter, Johnson Controls (NYSE:JCI) reported diluted earnings per share of $1.07 -- an 18% improvement year over year. Although profits came in higher than expected, revenue fell short, missing by $90 million. All of this is merely scratching the surface, though, so let's dig in deeper to gain a better understanding of how the company fared overall.

Merge lane is closer than it appears

When Johnson Controls rings in the new year, the company will look different from what it does today, since it expects to complete its major M&A activity by the end of the year. In addition to spinning off its automotive interiors business, the company is merging with Tyco International (NYSE:TYC), a leader in fire and security solutions. Although management had previously suggested that the deal would be completed by Oct. 1, during the earnings presentation, it reported its expectation that the deal closes by Sept. 2.

As a result of the new date, Johnson Controls will include one month of Tyco's results in its fiscal 2016 consolidated financial statements; furthermore, its consolidated balance sheet will reflect Tyco's debt of about $2 billion and about $4 billion in debt from financing the merger. 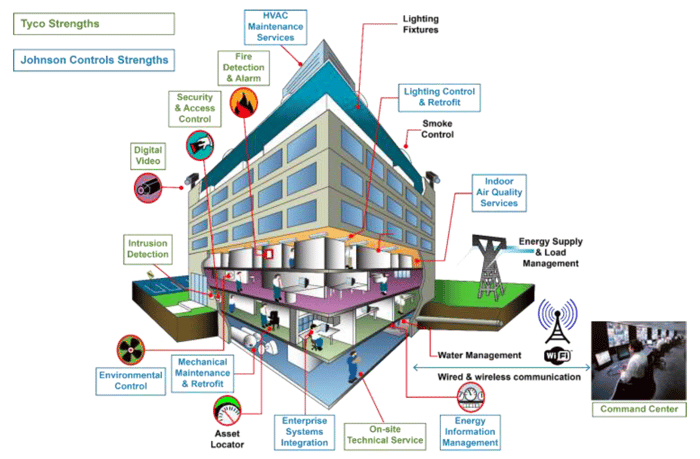 The quicker the deal closes, the quicker the company will start recognizing some of the anticipated benefits: $500 million in operating synergies and $150 million in tax synergies. More importantly, it will help it to retain its position as a leader in the smart building market.

Johnson Controls reported an overall 1% decrease, year over year, in net sales. And this figure could have been even worse had it not been for the building efficiency segment, which reported a 33% increase in net sales over the same period. Even more impressive, though, is what the segment did for the company's bottom line.

In the third quarter of fiscal 2015, the building efficiency segment accounted for 32% of the company's segment income; for this past quarter, the segment contributed 40%, suggesting that the company is in good shape for when it spins off the automotive interiors segment. And the segment's success is likely to continue. Management reported that the segment's backlog, which totaled $4.5 billion at the end of Q1 2016, now stands at $4.8 billion.

In addition to reporting impressive gains in several areas during the quarter, management praised its "strong balance sheet" as it moves closer toward executing its merger and spinoff. Basing this claim on the amount of debt in its capital structure, management cited its net debt-to-capitalization ratio as proof that it is well positioned to continue executing its M&A plans.

Investors should be circumspect about this, though. During its strategic review last December, management estimated that its net debt-to-capitalization ratio -- to be higher early in the year -- would fall between 34% and 37% for fiscal 2016. In fact, the trend has proceeded in the opposite direction.

The company finished the third quarter with a net debt-to-capitalization ratio of 44% -- the result of a steady, unanticipated climb from the 39.1% it reported at the end of the first quarter. Considering the merger with Tyco will result in the addition of $6 billion in debt to its balance sheet, it's likely that the ratio will rise even higher by the end of fiscal 2016 -- far exceeding management's expectation.

Undesirable as it may be, the greater degree to which the company is leveraged should be manageable if it is able to recognize the anticipated synergies and opportunities for revenue growth.

Apparently, Johnson Controls reported a successful quarter, but as we've seen, there's much more to a company's quarterly performance than just one figure. Management remains bullish about the rest of the year. Having upwardly revised the lower end of its previous estimate, management now forecasts diluted EPS to fall between $3.95 and $3.98 for fiscal 2016. Should the company not meet this estimate, investors should be circumspect and dig deeper into the financials. Is the company increasing its reliance on debt to finance its operations? Is the company generating enough cash to adequately service its debt? Has management executed the merger and spinoff successfully? These are just some of the many questions for investors to consider during the next earnings season.