Please ensure Javascript is enabled for purposes of website accessibility
Log In Help Join The Motley Fool
Free Article Join Over 1 Million Premium Members And Get More In-Depth Stock Guidance and Research
By Chris Neiger - Aug 1, 2016 at 11:21AM

There are few key artificial intelligence trends sweeping across the tech sector -- and savvy investors could benefit by getting in on them now. 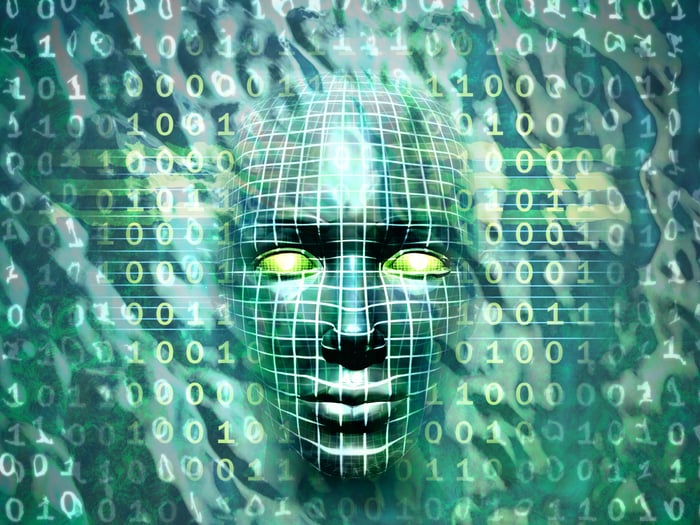 Artificial intelligence (AI) is quickly becoming the backbone of many software features and services we use everyday. Anytime you search for specific image in Google Photos or read through Facebook's (FB -5.12%) NewsFeed, you're using a form of AI software and algorithms.

These are just small AI examples, but there are much larger artificial intelligence trends that are changing how we drive our cars, use energy, answer questions, and connect with others.

The companies behind these AI trends are pushing the technology forward like never before, and they (and their investors) could see major benefits just around the corner.

The brains behind the driverless car wheel

Driverless cars are coming, there's no debating that. The National Highway Traffic Safety Administration (NHTSA) will release official rules for driverless cars as early as this month, and nearly every major automaker and technology company is pursuing driverless technology right now.

IHS Automotive estimates that 76 million cars will have some level of autonomy between now and 2035, and that fully driverless cars could become ubiquitous nearly three decades from now.

The autonomous car market will be worth $42 billion by 2025.

But before we get there, cars will need to understand their surroundings and make informed decisions based on the data they're taking in. NVIDIA (NVDA -6.82%) is one such company making that happen.

The company's Drive PX 2 platform allows cars to process information in real-time and gives semi-autonomous vehicles the ability to decipher between an ambulance and a van. This artificially intelligent situational awareness allow vehicles to interpret their surroundings in similar ways that humans do.

The company is also using supercomputers, like its new DGX-1, to research cloud-based artificial intelligence systems for future autonomous vehicles. DGX-1 could eventually offload some of the hardest AI and deep learning systems in cars to cloud servers that process the information in real time.

Last year, Alphabet's (GOOG -3.69%) (GOOGL -3.93%) Google bought AI company DeepMind for $500 million, and now the company is using it to save energy across its complex data centers.

Google said recently it has reduced its amount of cooling energy usage in one of its data centers by 40% after it applied sophisticated artificial intelligence algorithms to manage the system.

The DeepMind computer combed through data from thousands of sensors and made changes to the system to improve efficiency (like turning the water on and off at certain times and adjusting the temperature).

The company said managing the complex data center cooling systems is too complicated for humans, so they looked to AI for the solution. Google said the algorithms will be used in the remaining 14 Google data centers by the end of the year.

Google's DeepMind said in a press release that, "This will also help other companies who run on Google's cloud to improve their own energy efficiency."

Applying deep learning to software across all sectors (and not just energy) could bring in $10 billion in sales in the enterprise market by 2024, according to Tractica.

The social side of artificial intelligence

Facebook hasn't been in the artificial intelligence space for very long, but it's already making big strides.

The social media giant recently started using its DeepText artificial intelligence system that can read the content of thousands of posts in seconds, in 20 different languages, and understand them almost as well as a human.

With more than 1.6 billion users, there's no way Facebook could keep track of of all the content it has, enforce its own content rules, and serve up relevant posts without the help of AI.

The company isn't just using artificial intelligence for reading text in posts, either. It's expanding its deep learning technology to identify users and their friends in Facebook videos through facial and voice recognition.

Before you start thinking this all sounds like a frivolous use of AI, consider that Facebook used its vast knowledge about its users, their posts, their likes and reactions, and all of their content to serve up $17 billion worth of advertising revenue last year.

In a recent Bloomberg article, Microsoft (MSFT -4.55%) CEO Satya Nadella said about apps that, "The complexity is too much. We need to tame it. We need to be able to make it much more natural for people to get things done, vs. this thing about let me remember the 20 apps I need to get anything done."

The company is trying to simplify our interactions with mobile and desktop devices by adding more natural language technology powered by highly sophisticated artificial intelligence.

It's not a new concept, but it's one Microsoft has had some success with. The company's Xiaoice chatbot has been used a used as a weather forecaster on Chinese television, and it's also been added to the WeChat app to answer questions from users and remember bits of topics from previous conversations.

The idea behind Xiaoice, and Cortana, eventually, is that these chatbots and assistants will be our primary way of finding information online, booking trips, buying clothes, and interacting with our devices.

Amazon.com (AMZN -7.16%) is betting on this potential, too. The company's CEO, Jeff Bezos, says his company has more than 1,000 people working on its connected home speaker, the Echo, and its Alexa virtual assistant. Users can ask Alexa to order products off of Amazon, answer some general questions, find out about the weather, and even order a pizza or Uber car.

And Bezos has said that what the company is doing with Alexa right now is "just the tip of the iceberg."

For investors who want to get in on the artificial intelligence market, there's no need to look further than the technology companies that are already dominating their respective markets right now.