The market has pummeled both clinical-stage biotech stocks following bad news for their lead candidates. Find out which is most attractive now.

The market began 2016 with little appetite for biotech stocks, driving the iShares Biotechnology ETF down nearly 30%. On the whole, sentiment has improved somewhat, with the industry-tracking ETF down about 13% year to date, but the good vibes haven't resonated through the entire industry.

With both biotechs trading at relative discounts, investors are wondering if the beatings were justified. Let's compare the recent setbacks and some other factors to see which is most attractive right now.

Beginning in mid-June, Anavex Life Sciences stock began soaring in anticipation of 31-week efficacy data from an open-label study for lead candidate 2-73, for treatment of Alzheimer's disease, along with a slew of preclinical data suggesting that 2-73 could play a role in several other neurological disorders.

Veteran biotech investors knew beforehand that any results from the 32-patient, open-label dose-determination study would need to be taken with a grain of salt. This trial was designed to determine a safe and effective dose (the goal of phase 2 trials in general), not prove efficacy. Perhaps investors have grown accustomed to better-funded biotechs, which include control groups in early- to mid-stage clinical studies in order to get some hints about efficacy before investing in pivotal and expensive phase 3 trials. Perhaps Anavex's presentation of five-week efficacy data raised hopes too high.

Whatever the reason for the run-up, here's what we learned: At 31 weeks, 27 of 32 patients remained on therapy, and the cognitive abilities of all patients, as measured by the mini-mental state examination (MMSE), were slightly lower at 31 weeks than they were at the beginning. 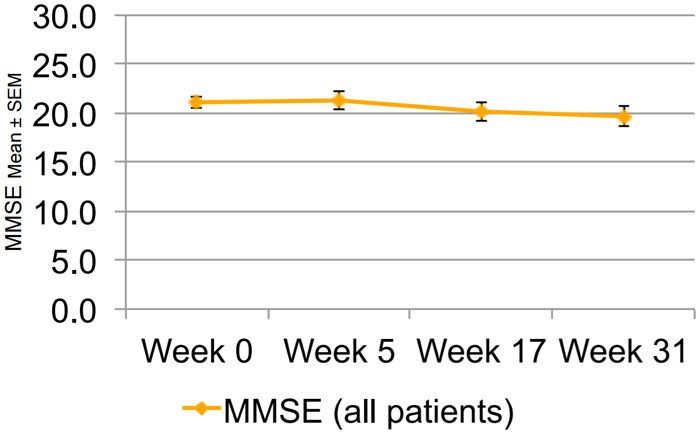 A score of 20 is the commonly accepted border between mild and moderate dementia, and the yellow line went the wrong way. If there had been a control group that did not receive 2-73 and posted significantly lower scores, then the stock might have continued soaring. With so few patients, we can't draw any reliable conclusions from this data, but that didn't stop the stock from plummeting more than 40% in minutes following the release.

Juno Therapeutics also suffered a clinical shock, but of a far different variety. Last month, the stock sank more than 30% overnight after the FDA placed a clinical hold on its lead candidate, JCAR015, following two patient deaths in an acute lymphoblastic leukemia (ALL) trial.

The candidate is an infusion of immune system T-cells, modified to seek out CD19 on the surface of cancerous cells and destroy them. Data from a 46-patient trial presented earlier this summer showed JCAR015 is surprisingly good at destroying tumor cells in this difficult-to-treat population.

Juno Therapeutics singled out one of two chemo drugs used to precondition patients as the cause of the patient deaths, and the FDA rapidly responded, lifting the hold weeks earlier than necessary. This nearly immediate action highlights the regulator's desire to see a much-needed treatment option succeed, but the market wasn't impressed. The stock is still about 24% lower than it was ahead of the hold.

The 31-week Anavex 2-73 data isn't necessarily bad, but it wasn't the miracle the company needs. By not conducting quarterly conference calls with investment-bank analysts -- a standard practice for practically every public company on major U.S. exchanges -- Anavex has left itself almost entirely reliant on further share offerings to fund further development of 2-73.

Anavex is open to collaboration with a bigger player, but the company hasn't announced any interested parties -- and some collaborative funding is sorely needed. Despite sponsoring a single 32-patient trial in just one city, Anavex burned through $6 million during the six months ending this March. How the company will finish funding the present trial (recently extended from 52 weeks to 104) and an anticipated pivotal phase 3 study with 2-73 is a mystery. One thing is certain, however: The $12 million in cash reported at the end of March won't get it there. You can also reasonably expect the 35.7 million shares reported outstanding at the end of March to rise significantly, shrinking investors' slice of any potential profits.

Juno Therapeutics, on the other hand, lost $71.1 million in the first quarter with eight candidates in 12 clinical studies, and finished the period with $1.1 billion in cash and short-term securities. Blood cancer juggernaut Celgene has taken a 9.8% equity stake in Juno and exercised an option to develop and hopefully sell Juno's JCAR015, along with other candidates aimed at the same target, outside North America and China.

Just how much Celgene will contribute to Juno's development costs isn't entirely clear, but at least it has the means to see its lead program through development -- and into commercial stages if it's approved. That's a lot more than we can say for Anavex, and it's the biggest reason I can call Juno Therapeutics the better buy without hesitation.