Time Warner (NYSE:TWX) has positioned itself well for whatever happens in the pay-television industry. The company's signature property, HBO, operates both as a premium pay channel on traditional cable and as a stand-alone streaming service.

That gives the company the best of both worlds and explains at least partly why its stock opened 2016 at $63.74, only to climb to $76.65 as of July 29, a 20% gain, according to data provided by S&P Global Market Intelligence. 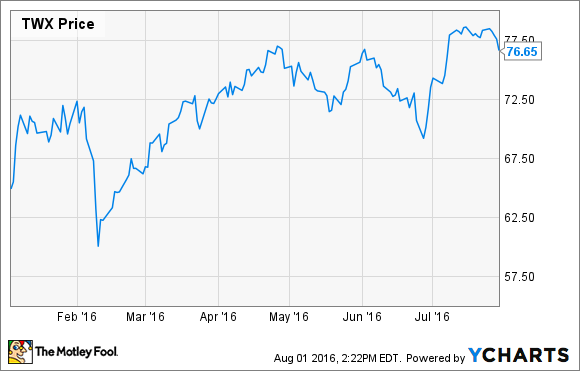 What: Even as the market for cable changes, Time Warner has proven resilient not just because of HBO but the strength of its overall portfolio. The company owns popular networks, including TBS, TNT, CNN, and Cartoon Network, among other channels -- properties with shows that people who cut the cord still want to watch. That means even if people drop cable, they are likely to seek out content from these popular networks via other services.

So what: Unlike its biggest rival Comcast (NASDAQ:CMCSA), Time Warner does not offer cable or internet services. That means its fate is not tied to whether people cut the cord with pay-TV or not.

Time Warner makes money producing content through its television and movie studios. One of the ways those shows are distributed is through its own cable outlets, but those channels and shows would likely be in high demand even in a pay-TV universe, where people want to spend less.

In the first quarter, Time Warner revenue "increased 3% to $7.3 billion due to growth at Turner and Home Box Office, partially offset by a decline at Warner Bros," the company reported in its earnings release. HBO was particularly strong, growing revenue 8% year-over-year. That suggests that even though the pay-television universe has been steadily (albeit slowly) shrinking, Time Warner is still growing viewership through other parts of its business.

Of course, the end of forced bundling and traditional cable would hurt Time Warner through the loss of carriage fees, but Comcast would face a one-two punch in many cases, losing viewers and subscription revenue.

Now what: The reality is that cable's death, if it actually happens, is not coming any time soon. The industry has slowly bled subscribers, and Time Warner has reacted well to the changes. Launching an HBO streaming service in a way that did not anger cable companies (much) was a masterstroke. Going forward, the company will have to continue its evolution as the industry changes, but so far, it has skillfully navigated some very choppy waters.