Alongside FedEx Corporation, the package-delivery giant is seeing some variable trends in its earnings but remains set to hit its earnings targets.

United Parcel Service Inc. (UPS -0.25%) released a solid set of second-quarter results and reaffirmed its full-year guidance. In common with its rival FedEx Corporation (FDX -0.45%), UPS appears to be on an even keel for 2016, but there are a lot of moving parts in its results. It's time to take a closer look at the earnings report.

Starting with the key figures and guidance:

It all seems pretty mundane, but these figures need qualifying. For example, excluding currency effects, revenue would have risen 4%. Moreover, on the earnings release, UPS claimed that "lower fuel surcharge rates reduced revenue growth by approximately 120 basis points." For reference, 100 basis points is equivalent to 1%

Moreover, a look at year-over-year operating profit growth demonstrates the contribution of the international package segment to overall profit growth of $78 million. 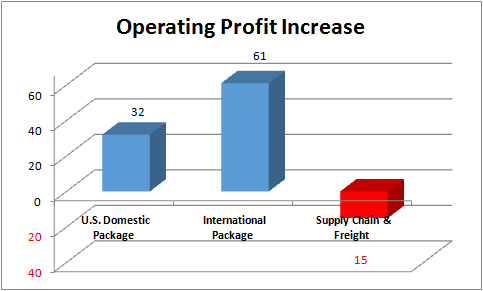 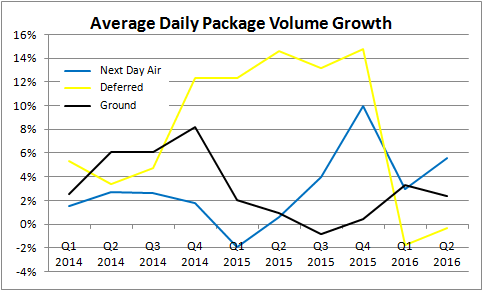 Third, strong e-commerce growth is causing an increasing number of lightweight packages delivered, and this is likely to be pressuring margin growth.

Put together, UPS is seeing some positive and negative pressures on U.S. domestic margin, and they appear to be offsetting each other. Indeed, Barclays Capital analyst Brandon Oglenski asked on the matter during the earnings call. CCO Alan Gershernhorn replied pointing out that "core pricing remains firm," while there was an "offset of about 100 basis points due to lower fuel surcharges, and we are continuing to see changes in the customers and product mix, and specifically the package characteristics, as we bring more lightweight into the business."

The end result was that U.S. domestic margin was basically flat.

The second quarter marked the sixth consecutive quarter whereby UPS has generated double-digit operating profit growth in the international package segment. It's largely a consequence of internal action, rather than any external help from the economy. Simply put, UPS is generating cost and productivity improvements and benefiting from what UPS International President Jim Barber believes is a "best-in-class" network in Europe.

Going forward, CFO Richard Peretz expects "to continue into the second half of the year the progress we have made, with operating profit growth in the 8% to 12% range" with regard the segment.

While the U.S. domestic segment has B2C and e-commerce growth to help counter weakening economic growth and the international segment is generating productivity improvements, it's a lot harder for the supply chain and freight segment to avoid the economy. As such, Peretz referred to the segment's performance as "slightly below expectations."

The 13% increase in revenue was largely due to the acquisition of Coyote Logistics, but overall conditions remain weak. Peretz spoke of "strong revenue growth in the healthcare, aerospace, and automotive sectors" within the distribution unit, but it wasn't enough to offset weakness in the freight business. In fact, total tonnage was down 10% in freight, and Peretz expects ongoing softness in international air freight and U.S. trucking markets.

All told, UPS' quarter saw the continuation of the trends that FedEx previously reported on. Investors can hope that strengthening e-commerce and B2C growth will continue to counter weakness in business deliveries. In hte meantime, UPS continues to generate good margin improvements in international, while FedEx is also focusing on its international operations following its purchase of TNT Express.

So far, the puts and takes have offset each other, and UPS is still on track to hit its full-year earnings guidance -- a good outcome under the circumstances.