As the liquidation of Sports Authority winds down, Dick's Sporting Goods (NYSE:DKS) is emerging as a clear victor from the proceedings. What will the demise of Dick's biggest competitor mean for the company, and what should investors expect going forward?

What Dick's got from Sports Authority

Sports Authority filed for bankruptcy protection earlier this year, with intentions to reemerge as a leaner, viable business. That didn't happen, and the company was ultimately forced to put itself up piecemeal for auction.

While a trio of liquidators took over operations to sell off all remaining inventory, the other assets remained up for sale. In late June, Dick's staked claim to the Sports Authority business name; intellectual property, including the website, loyalty program, and customer files and email lists; and 31 store leases.

Dick's scooped up the Sports Authority name and intellectual property for a measly $15 million. The company beat out British competitor Sports Direct International, which had submitted a bid for $13 million. Dick's assumed the 31 store leases for an additional $8 million. 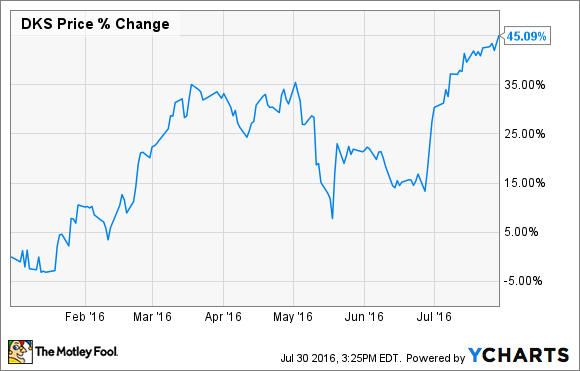 During the auction proceedings, smaller sports retailers, including Modell's and Sports Direct International, were in talks to buy and possibly revitalize the Sports Authority name. With the purchase of the business name and website, Dick's has ensured it no longer needs to compete with any sort of Sports Authority v2.0.

Dick's has also been growing its online store sales. In the last quarter, e-commerce inched up to 9.2% of total sales from 8.5% a year ago. The old intellectual property of Sports Authority could be a contributor toward the online sales push.

The auction winnings also complement the current company strategy for physical store expansion. During 2016, the company expects to add 36 new Dick's Sporting Goods stores and relocate another nine. Tacked on to that are another nine new Field & Stream and two Golf Galaxy stores. With store lease agreements already in place for the planned expansion this year, investors get a clear picture that Dick's plans to continue growing store count after 2016 with the assumption of the 31 store leases.

CEO Ed Stack stated on the last earnings conference call that of the 400 Sports Authority locations, 200 were within five miles and 350 within 10 miles of a Dick's Sporting Goods store. With the company looking to grow organically into new or underexposed markets, Stack expressed interest in choosing locations that fit that ticket. Investors will want to look for details on the 31-store acquisition during the quarterly report to see where they fit with the company's stated strategy.

Most importantly, with the breakup of Sports Authority and no other single sports retailer picking up all the pieces, Dick's stands to increase market share. Management is betting that foot traffic from the 200 closing locations within five miles of one its stores will likely find its way to a Dick's Sporting Goods instead.

The consolidation of the sporting-goods industry is a big setup for future growth for Dick's. Management is excited that its investments into both e-commerce and physical footprint expansion will pay off in the years to come. The auction purchases from Sports Authority are simply icing on the cake.

Investors excited about making a new purchase of Dick's Sporting Goods stock should beware, though. With shares up nearly 50% on the year and over 25% on all the news in the past month, short-term benefits from the acquisitions have now been priced in.

The company, in fact, has reported that because of ongoing inventory liquidation sales scheduled through the end of the summer, second quarter results set to be released in August could be disappointing. I would advise caution and patience at the moment until we get more clarity on progress from management in a few weeks.