Watch out, Amazon (NASDAQ:AMZN): Azure is big and growing rapidly.

At least, that's the story Microsoft (NASDAQ:MSFT) is telling. In its fiscal fourth-quarter earnings report, Microsoft noted that Azure, its infrastructure-as-a-service business, grew revenue 102% year over year. It also said its "intelligent cloud" segment, of which Azure is a part, brought in $6.7 billion, up nearly 7%. By comparison, Amazon's AWS grew 58% year-over-year in the most recent quarter, notching nearly $2.9 billion in net sales.

Azure is grabbing share of the market, growing faster than AWS. On the earnings call, Microsoft CEO Satya Nadella boasted that, "we cover more countries and regions than any other cloud provider." Microsoft seems to see itself as a big threat to Amazon in cloud computing. Should Amazon investors worry that Microsoft could slow down the growth of Amazon's biggest profit driver?

Amazon is still the king

Microsoft doesn't give a dollar figure for Azure revenue. Considering, however, that the company's intelligent cloud segment grew just $415 million year over year, that 102% year-over-year growth from Azure -- just a part of intelligent cloud -- doesn't look that big.

Even if 100% of the growth from the segment came from Azure, that would mean Microsoft's AWS competitor brought in just $822 million last quarter. In other words, AWS is still at least 3.5 times the size of Azure.

But there are some important things to note.

Microsoft has managed strong growth numbers despite cutting prices on several Azure services over the past few months. It cut pricing on some high-end virtual machines up to 27% in October, and it cut its lower-end virtual machines by up to 17% in January. Amazon, too, has cut prices on its services. Its EC2 prices came down a modest 5% at the beginning of the year.

Unfortunately, Microsoft hasn't reported Azure revenue growth on a regular basis, so it's impossible to see the year-over-year growth trends. However, Amazon saw a significant acceleration in revenue growth for AWS a year after it made major price cuts, which can be seen starting in the second quarter of 2015. 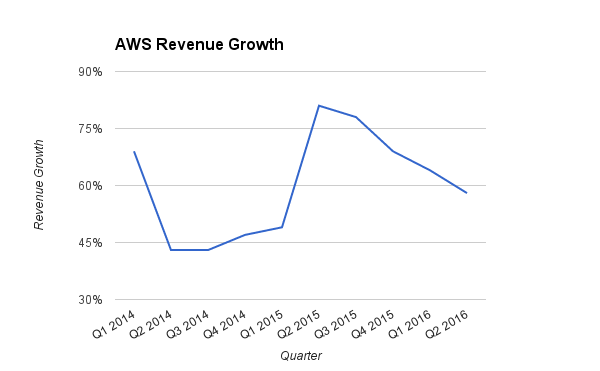 As such, Azure may see a surge in revenue growth starting in Microsoft's fiscal second quarter this year after lapping its first round of price cuts.

One indicator that a company has a solid moat to protect it from competition is a relatively high gross margin. Although Amazon doesn't break out AWS's gross margin, even Microsoft admits that AWS's margins are better. Amazon reports AWS's operating margin, which came in at 29.9% in the second quarter.

Microsoft says its cloud gross margin is being dragged down by heavy investments in "cloud capacity, deployment, and support" that the company is making in order to compete with Amazon and take share of the market. To be sure, those investments are paying off (as indicated by the high revenue growth rate).

But it's not like Amazon is just standing still. AWS announced 722 "significant new services and features" in 2015, 40% more than 2014, on top of expanding to more regions.

Microsoft CFO Amy Hood expects gross margin for Azure to improve in fiscal 2017 "from the benefits of scale and the investments we've made, but importantly also in the revenue trajectory we're seeing and the makeup of that revenue." She added, "I think I have a strong line of sight to AWS's margin profile and still feel good about the progress we're making."

Until Microsoft can show progress on the gross margin front, Amazon remains the best and most profitable play in cloud computing. But with the secular migration to cloud infrastructure, all players in the market stand to grow revenue at a strong clip.