So what: Biogen shares have been in a funk since management disclosed disappointing results for a key multiple sclerosis drug in its pipeline, however, investors began returning to the beat-up stock last month ahead of the company's second quarter earnings release. 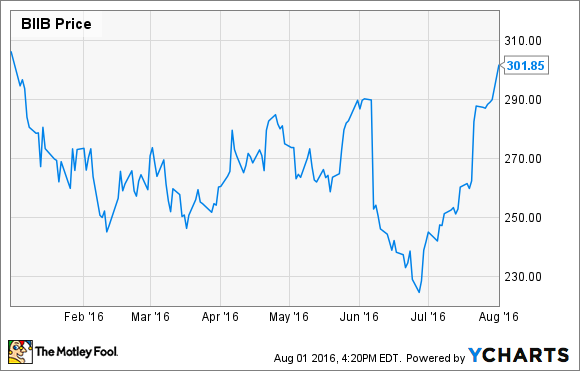 Buyers were rewarded with second quarter sales growth of 11.7% year-over-year to $2.9 billion. Non-GAAP EPS surged 23.5% to $5.21 in the quarter too. The top- and bottom-line results were better than consensus estimates by $100 million and $0.53 per share, respectively.

The most notable performers in the quarter were Tecfidera, Plegridy, and the company's hemophilia drugs, Eloctate and Alprolix. Tecfidera sales were $986.5 million, up 5% from last year. Plegridy, a long-lasting version of the company's MS drug Avonex, brought in $123 million in sales last quarter versus $74 million last year. And Eloctate and Alprolix combined to generate sales of $205 million, up from $128 million a year ago.

Now what: Biogen said last month that partner Ionis Pharmaceuticals, Inc. (NASDAQ:IONS) had completed enrolling spinal muscular atrophy (SMA) patients in a key study of nusinersen. Today, the two companies reported that an interim look showed that nusinersen can successfully treat these patients. The news prompted an early stoppage of the trial and to Biogen handing over $75 million to Ionis to exercise its option to commercialize the drug globally. The companies plan to file for approval of nusinersen in the coming months and analysts believe that, if approved, its peak sales could eventually eclipse $2 billion.

The win helps restore confidence in the Biogen's R&D strategy and it could help further diversify Biogen's business. Biogen generates the bulk of its sales from MS treatments and earlier this year, it outlined plans to spin-off its hemophilia business in 2017.

Overall, Biogen is an industry heavy-weight with plenty of irons in the fire. In addition to nusinersen, the company's partnering with Samsung Bioepis to create biosimilars, or drugs that work similarly to but aren't exact copies of biologics. Last month, European regulators accepted for review the partner's biosimilar to Humira, an autoimmune disease drug with $14 billion in global sales. Biogen is also developing other intriguing therapies, including aducanumab, a potential treatment for Alzheimer's disease.

Since the company's already handsomely profitable, Biogen could be a savvy addition to growth investors portfolios; especially since they're only trading at about 15 times full year EPS guidance in spite of their recent run higher.