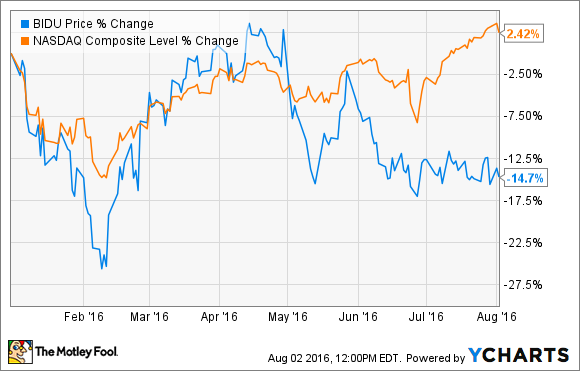 As the leading search engine in China and a market with massive growth potential, Baidu seems an unlikely candidate to stumble, especially given its highly profitable business model. However, that's exactly what Baidu has done of late, as its Q2 earnings report shows. Let's examine what's gotten into this company.

Despite sales that climbed 10.2% in the second quarter, the company saw net income decline 36% year over year, as stricter regulations surrounding its advertising business and higher taxes crimped its bottom line. This marks the most significant profit decline on record over Baidu's 11 years as a publicly traded company.

The Chinese government recently enacted regulations requiring online advertising companies -- including Baidu -- to limit the number of ads appearing on each search page to less than 30%. Such advertisements also must carry some kind of eye-catching designation to help users more clearly discern between sponsored and organic search results.

"A portion of our customers who are not compliant are not able to spend with us, reducing the number of online clients," Baidu CEO Robin Li said in regard to the change. However, he added, "This is the right thing to do for [the] long-term health and sustainability of our business."

Baidu forecast a weaker-than-expected outlook for the company's third-quarter results, saying it now expects sales to range between $2.7 billion and $2.8 billion. The lower range of Baidu's guidance represents a 1.9% year-over-year sales decline, the first such decline in the company's history should it come to fruition.

In explaining some of the issues affecting his company's performance, Li said, "While we are experiencing some short-term hiccups, Baidu's value proposition remains robust." He also made sure to proclaim that "this period of uncertainty will pass."

Does that mean Baidu is a shrewd contrarian's buy in this time of weakness?

At first glance, Baidu isn't obviously cheap, trading at 33 times its next 12 months' estimated EPS. However, when compared with the company's long-term growth potential, Baidu still seems rather attractive.

Investors should think of Baidu as a series of distinct businesses split between search, so-called "transaction services," its Netflix proxy iQiyi and emerging technologies such as artificial intelligence and self-driving cars. Let's quickly review the potential upside from each of these.

Baidu primarily monetizes its search business by selling ads to small and medium-sized enterprises (SMEs). The company counted 594,000 online ad customers in its Q2 reports, compared with 4.3 million total SMEs in China's Ministry of Commerce, though that official figure was most recently updated in 2012 and other estimates skew into the tens of millions. Either way, Baidu enjoys ample opportunity to bring on more online advertising customers, given the dominance of its search engine and the competitive advantages search advertising enjoys.

Turning to Baidu's more nascent growth opportunities, its transaction services segment -- online services such as online food ordering and movie ticket purchases -- enjoys an estimated total addressable market of $1.1 trillion, according to one research firm. Should it grow to just a fraction of this estimate, the long-term profit potential Baidu shares in this segment -- along with a handful of other Chinese large-cap tech giants, such as Alibaba and Tencent -- sits somewhere in the billions of dollars. Baidu also owns iQiyi, an online video streaming platform that reportedly has 20 million paying subscribers.

Baidu has also plunged into a host of other areas of technology, including self-driving cars and other AI-powered services. Predicting these services' potential financial value would be premature, though it's certainly more than nothing.

In short, Baidu enjoys a bright future, even if it seems likely to suffer from some near-term slowing of its growth rate, making the company an interesting potential addition to long-term investors' portfolios.