TransCanada Corporation (NYSE:TRP) reported second-quarter earnings of $277 million (C$365 million) on just over $2 billion in revenues. This showing represents a drop in earnings from a year ago, which were $326 million, but an increase from last quarter's earnings of $192 million. Additionally, its $1.6 billion in net cash from operations over the past six months is well ahead of the $1.3 billion from the same period in 2015.

TransCanada's earnings, though seemingly positive, really don't tell the whole story of its second quarter. The company appeared far more committed to expanding its assets and pipeline footprint than in strengthening its financials. While this approach ultimately might drive future growth, it creates an unsustainable business model that will eventually need to be corrected.

TransCanada hasn't been shy about its intent to expand its assets. The company has planned over $53 billion in planned short- and long-term growth projects, including modernizing and expanding its newly acquired Columbia Pipeline Group. Purchased for $13 billion in July, Columbia brings over 15,000 miles of natural gas pipelines to TransCanada, allowing it to capture the growing production from the Marcellus and Utica shale regions in the eastern United States. 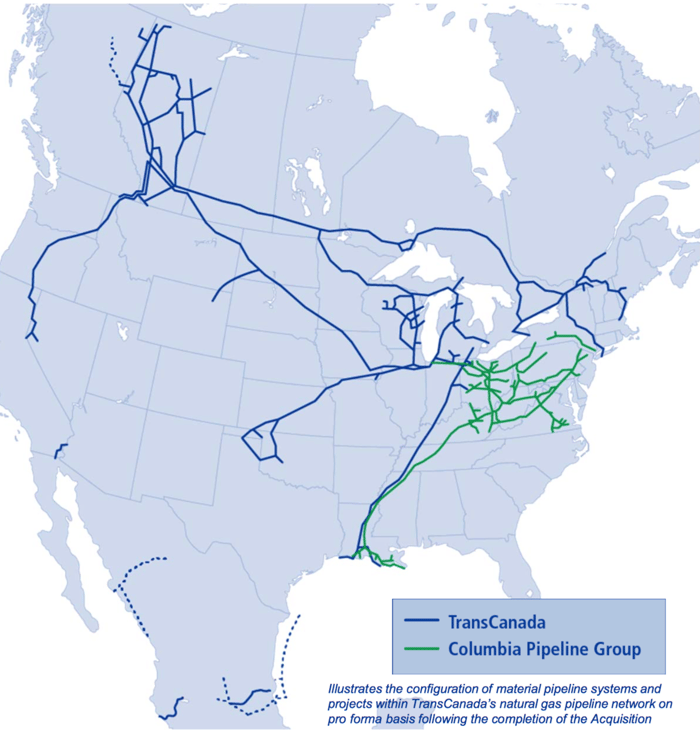 Additionally, TRP made large forays into Mexico, securing multiple contracts to construct and operate new pipelines. The largest of the projects, called the Sur de Texas to Tuxpan pipeline, is supported by a 25-year natural gas transportation contract. TransCanada is responsible for $1.3 billion of the $2.1 billion project. The company also won the opportunity to build the Tula-Villa de Reyes natural gas pipeline, which is also secured under a 25-year contract. Both pipelines are expected to come into service in 2018.

In Canada, TransCanada continues to develop the Energy East pipeline, which will connect the Alberta region to eastern Canada. That project is currently under review by the Canadian government and won't even begin construction until probably 2018. Also in Canada, the company completed and began construction of almost $750 million worth of projects for the 2018 facilities program for the NGTL System.

And since it can't be forgotten, TransCanada also sued the U.S. government for over $15 billion under the North American Free Trade Agreement for denying the construction of the Keystone XL Pipeline.

That rundown of projects wasn't meant as a sale pitch. In the second quarter, TransCanada was simply busy. The point of it all -- and all of the growth and expansion projects aren't listed here -- is to secure future growth. TransCanada is making a large bet that the $53 billion in capital spending -- which includes $8 billion dedicated to the Keystone XL Pipeline and $7.3 billion dedicated to improving its new Columbia assets -- will lead to long-term earnings growth. If so, it will enable the company to grow its 3.8% dividend yield by an expected 8% to 10% each year through 2020.

But while it's encouraging to see a company focus on long-term growth, these projects all cost money. For example, TransCanada funded its purchase of the Columbia Pipeline Group through the sale of $4.4 billion of subscription receipts, as well as $6.9 billion in bridge term loan credit facilities pending the sale of assets, and cash on hand. Additionally, the company has another $7.3 billion in new capital spending to expand six of the pipelines to pick up a greater share of the Marcellus and Utica shale regions.

Because of the added debt to fund its activities, the company's debt-to-capitalization increased from an unsightly 63% in the first quarter to an even more alarming 69%. Considering TransCanada is maintaining and even increasing its dividend, it doesn't seem too concerned about its cash reserves and flexibility. But if these long-term investments don't pan out, that level of crushing debt can become an extreme burden to growth.

I'm usually encouraged by a company that's dedicated to expanding its assets to drive future growth. Sometimes, though, a company can take on too much too quickly. TransCanada's second quarter showed an impressive array of acquisitions and investments, but its balance sheet could quickly spin out of control if it doesn't boost profits and lower its debt load.