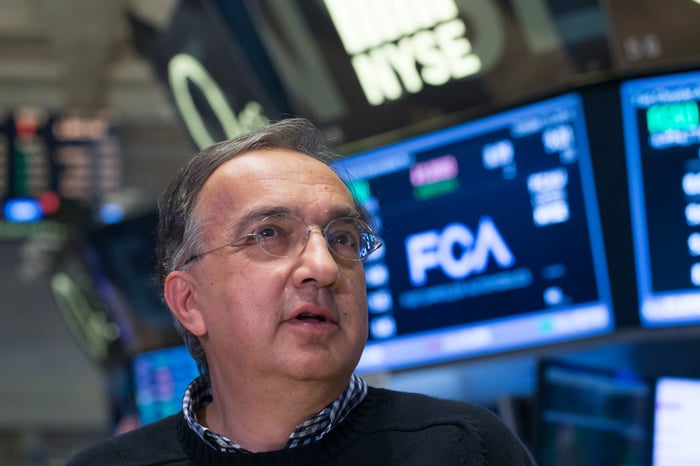 FCA CEO Sergio Marchionne is reportedly on the verge of a deal with Samsung Electronics that would put FCA $3 billion closer to an important goal. Image source: Fiat Chrysler Automobiles

Shares of Fiat Chrysler Automobiles (NYSE:FCAU) moved sharply higher on Wednesday after Bloomberg reported that Samsung Electronics (NASDAQOTH: SSNLF) is in "advanced talks" to buy some or all of FCA's Magneti Marelli auto parts unit.

What we know about the potential deal

First, some background. Magneti Marelli is a major supplier of automotive parts and components to FCA and other automakers. It focuses largely on electronic systems and related parts, including lighting, in-car entertainment systems, instrument clusters for dashboards, suspension components, and components for connected-car systems. Marelli is a wholly owned of FCA, but it appears that it's now for sale.

According to the Bloomberg report, Samsung is particularly interested in Magneti Marelli's lighting, in-car entertainment, and "telematics," or connected-car systems. It's possible that Samsung will seek to buy only those specific lines of business.

But Bloomberg's sources, identified only as "people familiar with the matter," say that Samsung might be considering an outright purchase of Magneti Marelli. Such a deal "could be worth more than $3 billion" and could close by the end of the year, according to the report.

A back-of-the-envelope 10-times-EBIT gives us a potential value of 3.21 billion euros. That's probably on the rich side, but the Bloomberg report suggests that the negotiations are in that neighborhood.

Why would Fiat Chrysler want to sell?

Magneti Marelli's connection to Fiat goes all the way back to 1919, when the company was founded as a joint venture in which Fiat was a partner. But here in 2016, it's easy to see why FCA might want to sell: The boss is in a hurry to pay down debt.

As of the end of the second quarter, FCA's debt exceeded its cash by about 5.5 billion euros. CEO Sergio Marchionne's goal is to have FCA's cash exceed its debt by 4 billion euros by the time he retires in 2019, likely in hopes of making the company more attractive to a potential acquirer.

As we've seen, Marelli is profitable, but it's a low-margin business. If Marchionne can really get $3 billion or more for it, it's a good deal.

Why would Samsung want to buy?

It's no secret that Samsung would like to diversify away from consumer electronics. With the rapid technological changes coming to the auto industry, it's a no-brainer that Samsung might want to follow the lead of rivals like LG Chem, Nvidia, and BlackBerry, each of which has established or expanded significant automotive lines of business in recent years.

Samsung already does business with FCA. Among other things, it supplies the batteries for the electric version of the Fiat 500. That relationship is expected to expand as FCA adds more electric vehicles to its portfolio. Acquiring Magneti Marelli would greatly expand Samsung's presence and clout in the auto industry.

There's also a personal connection. Samsung family heir (and vice chairman) Jae Yong Lee is on the board of directors of Exor, a company that serves as the investment vehicle for the descendants of Fiat founder Giovanni Agnelli. There's a direct connection to Marchionne: In addition to his duties at FCA, Marchionne is vice chairman of Exor.

The upshot: The deal makes sense

There's a reason that FCA's shares jumped on the news: At anything close to the rumored price, it would be a good deal for the automaker. On the other side, acquiring Marelli would instantly give giant Samsung a significant presence as a global auto supplier, positioning it well to be a player in the industry's rapid technological evolution.

Long story short: The deal seems to make a lot of sense. We'll see if it happens.