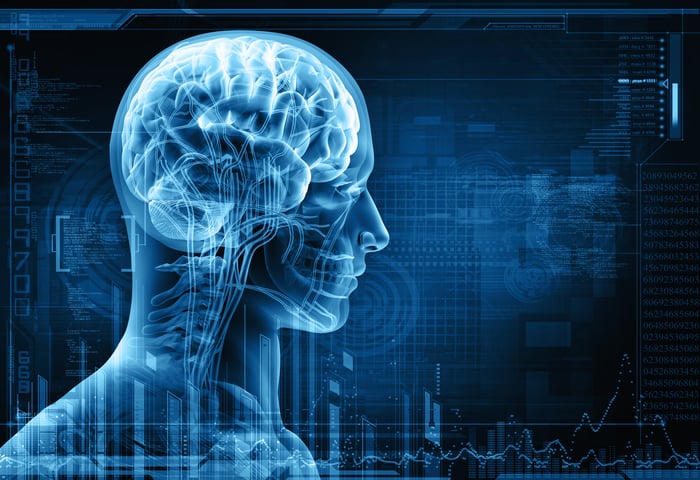 Since 2012, GlaxoSmithKline (NYSE:GSK) has been quietly pioneering an entirely new scientific field: bioelectronic medicines. The basic idea is to build miniaturized implantable devices that could precisely measure nerve impulses throughout the body, and that could subsequently correct any irregular impulses associated with diseases such as arthritis, asthma, hypertension, and diabetes.

This week, Glaxo took a major step toward making this moonshot a reality by signing a joint venture agreement with Alphabet's Verily Life Sciences (formerly Google Life Sciences) to create the first generation of bioelectronic medicines for chronic diseases. The new company will be called Galvani Bioelectronics, with Glaxo claiming 55%, and Verily 45%, of the new entity.

Why does this joint venture matter to Glaxo shareholders?

Glaxo's current clinical pipeline and product portfolio don't appear to hold an heir apparent to the former star asthma medicine Advair. At peak, for instance, Advair raked in over $8 billion in annual sales. Anoro Ellipta and Breo Ellipta -- the presumptive replacements for Advair -- are forecast, by contrast, to generate combined peak sales of only around $2.4 billion.

Glaxo lacks a true franchise-level product at this stage and is relying on segment-wide growth to offset falling Advair sales. An approval for a novel bioelectronic medicine -- one unlikely to face any competition whatsoever, for perhaps decades -- would be a superb way to solve this lingering problem.

But Glaxo will need more than just a single blockbuster drug to keep shareholders happy. And unlike most big pharmas, Glaxo has largely shied away from major mergers and acquisitions to bring high-value experimental drugs into the fold. Instead, the drugmaker has relied heavily on its internal and external pipelines to restock the cupboard, so to speak. This strategy hasn't worked out so well of late, however, with Glaxo seeing several of its most promising experimental medicines, such as the cancer vaccine MAGE-A3, flame out in late-stage testing.

In the company's efforts to infuse its pipeline with product candidates that have clear-cut blockbuster potential, this foray into bioelectronic medicines is an intriguing step forward. After all, it's probably too late for Glaxo to try to nudge back into the high-growth cancer immunotherapy space in a meaningful way, given the sheer number of companies currently charging toward regulatory filings and pivotal data readouts. And Glaxo doesn't appear ready to break with history to wade into the ongoing healthcare M&A bonanza.

Glaxo appears to have committed a mere $56 million per year for the next seven years to this joint venture with Verily, depending on the achievement of certain research milestones. That's not a huge financial hit for a company like Glaxo, especially since this moonshot effort could quite literally propel the drugmaker into an entirely new era of medicine.

Most importantly, though, Glaxo didn't break the bank to pursue this moonshot, which is vital in light of its ginormous debt-to-equity ratio of 463%, and meager (for a large cap biopharma) 12-month trailing free cash flow of $4.88 billion. In short, this joint venture is a low-cost, high-reward effort that could turn out to be a game-changer for the drugmaker down the road.

When could the first bioelectronic products hit the market?

The bad news: Glaxo and Verily have suggested that a bioelectronic medical device may take upwards of ten years to be ready for prime time. After all, we still know painfully little about the innervation of most organ systems at the level of individual nerve fibers -- a level of resolution that will be essential to make bioelectronic medicines a reality. And beyond the challenges associated with mapping the peripheral nervous system, Verily will be tasked with designing and creating devices small enough to be implanted along visceral nerves, but still capable of interfacing effectively. That's not a straightforward engineering problem, and it will likely require the invention of entirely new materials.

These drug and tech giants have set their sights on developing a potentially disruptive new field of medicine. For investors, however, this joint venture is unlikely to bring any rewards in the near term. And given the herculean technological challenges that have to be overcome to make bioelectronic medicines a reality, this joint venture definitely qualifies as a moonshot, to put it mildly. So Glaxo shareholders may certainly want to check up on this platform from time to time for the reasons discussed, but they aren't primary reasons to buy or hold this stock right now.