Based on Tesoro's (NYSE:ANDV) most recent results, you might not realize that the rest of the industry is facing major headwinds. After all, net income for the second quarter was down 25% while many peers have seen declines of 50% or greater. There is a catch to these results, though, as the company saw some one time gains that gave earnings a strong boost. Let's take a quick look at the company's most recent results and what investors should be looking for in the coming quarters.

Compared to its peers this past quarter, Tesoro's results stand out as particularly strong. A large reason for that is the company realized a pre-tax benefit of $363 million from the revaluation of its inventories. If we strip out this one time benefit, earnings per fully diluted share were $1.67. This decline in earnings is much more in line with what we saw at other major independent refiners this past quarter.

One thing that Tesoro had going for it compared to many other refiners is that gross margins actually held up much better than most this past quarter. The company's average refining margin for the quarter was $15.70 per barrel, a decline of 27% compared to this time last year. That inventory gain is baked into that result, so we're going to have to wait and see what those results look like next quarter to see if this quarter was purely a fluke or not. 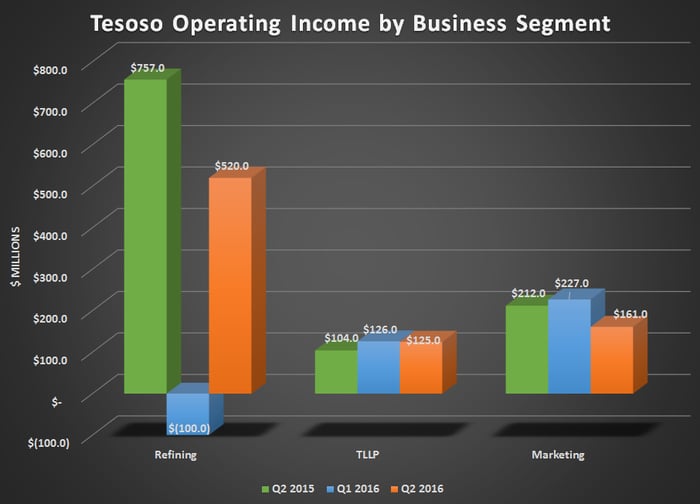 From an operational standpoint, the company remained relatively strong with utilization rates at 92%. Tesoro also lowered its operational cost per barrel by $0.57 compared to this time last year to $5.01 per barrel. Logistics income from its stake in Tesoro Logistics Partners (NYSE:ANDX) increased from higher natural gas gathering prices and increased volumes in the partnerships pipelines and storage tanks. Its marketing segment declined because of lower fuel margins, but it did increase its total stations by 8% compared to this time last year.

This was a pretty busy quarter for Tesoro on the acquisition front. First, it acquired wholesale marketing and logistics assets in Alaska from privately held Flint Hills Resources. It then immediately dropped those assets down to Tesoro Logistics Partners on July 1st for $400 million in cash and $44 million in new Tesoro Logistics shares. The deal is expected to close this quarter.

Tesoro also acquired Dakota Prairie Refining, which owns a 20,000 barrel per day refinery in North Dakota. The actual total for the sale was not disclosed, but the company did say that it would absorb the $66 million in debt associated with the facility as well as $10 million in working capital obligations. Chances are that since the actual price tag wasn't disclosed, the company got the refinery on the cheap. This facility was designed to produce ultra-low sulfur diesel that would be used in the Bakken region, but the rapid decline in drilling activity there has caused lots of headaches for the facility in recent years.

One promising sign was that Tesoro Logistics was able to raise $1 billion from debt and equity raises in the quarter. This is noteworthy because raising capital has been a little tougher for master limited partnerships in recent quarters, and Tesoro has big plans to expand Tesoro Logistics to 30% of its EBITDA by 2018.

One concern for some investors is likely to be the acquisition of the Dakota Prairie refinery and its fit in the rest of the business. Sure, the asset was cheap to acquire, but it's been a profitability black hole for its prior owners. When the company acquired the facility in June, CEO Greg Goff was pretty confident that it will be able to turn the facility around.

This acquisition presents new opportunities for continued growth. We have already identified plans to drive substantial improvements, and we are prepared to execute on these plans in 2016. This includes system-wide commercial and feedstock optimization, increased efficiencies in distribution and reduced transportation and refining costs. As a result, we expect to generate more than $20 million in annual operating income from this business -- even if the current economic conditions continue.

Tesoro does have some advantages that its prior owners did not. One of them is that Tesoro already has a 74,000 barrel per day refinery just 100 miles away. It should be able to leverage its infrastructure in the area to turn the fledgling refinery into a profitable venture.

Tesoro's quarterly results look to be much, much better than its peers, but some of that is a bit of smoke and mirrors as the company had the benefit of a large non-cash gain in the quarter. Still, the company's operations remained solid and it is keeping its balance sheet in relatively good shape as it invests heavily in Tesoro Logistics Partners. Higher costs to comply with the Renewable Fuels Standard and overall lower margins will likely continue to sting margins for the company, but the refining business is used to the ups and downs. In the coming quarters, two things to watch for are the growth at Tesoro Logistics and any updates on turning the Dakota Prairie refinery into a profitable entity as management claims it can. That will be more important for Tesoro's long term success than a quarter or two of weak refining margins.

Tesoro's Earnings Were Solid This Quarter, but They Look Even Better on Paper @themotleyfool #stocks $ANDV $ANDX Next Article
Current