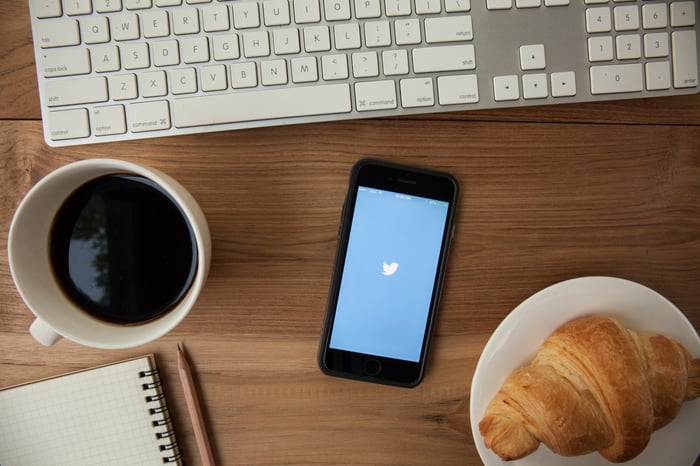 The growth at Twitter (NYSE:TWTR) has slowed to a crawl. While the company managed to eke out a 1% sequential increase in revenue and a 20% year-over-year increase, it gave the same guidance for the third quarter as it gave for the second quarter: $590 million to $610 million. That represents negative consecutive growth and just 5.5% year-over-year growth at its midpoint.

On the company's earnings call, COO Adam Bain noted that rivalry from other social media companies -- like Facebook's (NASDAQ:FB) Instagram or Snapchat -- have increased the competition for social ad budgets. And Twitter's ad pricing may have had an impact on its take rate compared to others. He said Twitter ads are priced at a premium, and some advertisers "just look at price."

Not all about return on investment

On the earnings call, management talked a lot about return on investment, or ROI. It's true that ROI is one of the most important aspects of online advertising, particularly direct response advertising that Twitter is working to build. But if the investment threshold is too high for most marketers to try it, then they'll never know if the return on investment is any good.

In 2013, Facebook lowered the minimum reserve price for some of its ads. By doing so, it increased the total number of advertisers on its platform, but it had a negative impact on its average ad price. The shift to mobile -- where Facebook shows fewer ads of better quality -- masked the impact on average ad price, which actually increased 36% that year.

Bain told analysts, "We're doing a bunch of work to help bring both prices down and improve ROI." The biggest factor in Twitter's declining ad prices is a shift to autoplay video ads from older cost-per-click ads on Twitter. But in CFO Anthony Noto's comments he noted that part of the decline in cost per ad engagement -- which fell 21% last quarter -- was due to changes in how the company is measuring ad engagement, particularly around video, in order to be more aligned with competitors.

"As an example, we've changed the MRC definition from 3 seconds to 2 seconds and 100% view to 50% view," Noto said. "And that was done to make our product more competitive with our industry peers that are driving lower prices at greater scale." In other words, it's now counting video ad views where the ad is only 50% viewable and plays for two seconds.

By comparison, Facebook charges once any part of the video ad comes into view. It added an option last year to only charge after users watched 10 seconds of ads, thus providing both a premium and inexpensive option. There's no reason Twitter couldn't do something similar.

Twitter is making its ads worse in order to compete on price, and hoping to make up for it in increased scale. That will not drive improved return on investment in any meaningful way.

Twitter says it's worked with 65 advertisers that used DoubleClick, and analyzed the data with them. "Revenue from those advertisers grew at a faster rate than our overall advertising growth," Bain told analysts. "And of the advertisers that ran in the quarter, a third increased their spend. So, a good nod to ROI."

Ultimately, the market should decide how much Twitter ads are worth -- not Twitter. Facebook dropped its ad prices, opening up bidding to more advertisers while its business was still growing. With Twitter's stagnant user growth and lack of other major growth drivers, lowering ad prices while keeping everything else the same would have a negative short-term impact. Long term, it may be what's necessary to bring in more advertisers and grow the business.