As the broadband industry has gotten smaller, average Internet speeds have improved for American consumers.

Over the past two years, AT&T (NYSE:T) has acquired DirecTV; Altice, which owns Suddenlink, bought Cablevision; Frontier (OTC:FTR) bought Verizon's (NYSE:VZ) wireline customers in California, Florida, and Texas; and, most importantly, Charter Communications (NASDAQ:CHTR) swallowed up Time Warner Cable as well as Bright House Networks. All of that M&A activity has been good news for American consumers, at least when it comes to broadband speeds, according to Speedtest by Ookla's U.S. Market Report for the first half of 2016.

The consolidation, along with Alphabet's (NASDAQ:GOOG) (NASDAQ:GOOGL) Google Fiber pushing rivals including Comcast (NASDAQ:CMCSA), Charter, and AT&T in markets where they once had monopolies, has resulted in fixed broadband customers seeing a big jump in performance "with download speeds achieving an average of over 50 Mbps for the first time ever," Speedtest reported. That's an over 40% increase since July 2015.

Upload speed jumped as well, improving by over 50% since the first six months of 2015, with the average consumer receiving upload speeds of 18.88 Mbps. And it's not just fixed broadband customers benefiting. Mobile users have seen big gains as well, according to the report, with average download speeds improving by 30% since last year, climbing to an average of 19.27 Mbps. 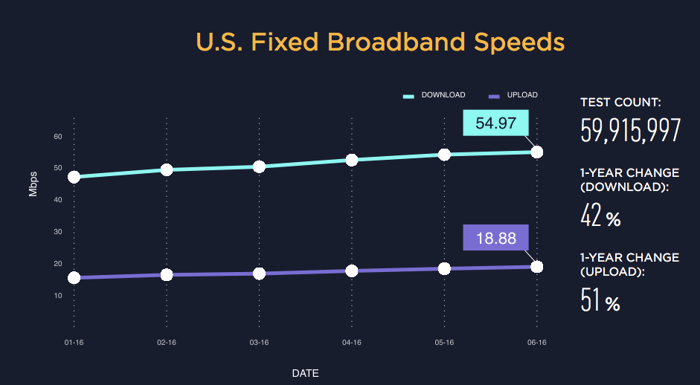 Competition is a good thing

The various carriers and providers would argue that consolidation has allowed them to invest more in infrastructure. That's likely true and it certainly will benefit a company like Frontier going forward to have the added customer base it bought in the Verizon deal.

Consolidation, however, is only one piece of the puzzle. A bigger one may well be that increased competition and the threat of even more as technology changes has pushed companies to get faster. That includes Google Fiber pushing Comcast, Charter, and AT&T, but it also involves the fact that the wireless phone carriers have become a rival to traditional internet in some cases -- especially for younger users used to watching video on phones and tablets.

Speedtest, while it did laud the improvement in its report, also threw a bit of cold water on its findings in relation to the internet speeds seen in the rest of the world.

"Competition is a good thing, and while we're seeing faster performance than ever before, the internet in the U.S. could certainly improve," wrote the company. "The U.S. still lags from an international perspective, currently ranking 20th in fixed broadband and 42nd in mobile internet performance globally."

Speedtest noted that in general consolidation has not typically boded well for innovation and increased speeds. In this case, however, competition plus consumer demand may force the broadband providers to continue to raise these numbers.

"U.S. consumer appetite for more speed is insatiable," wrote Speeedtest. "With the growth of municipal and locally focused fiber deployments, as well as network infrastructure investments from the big ISPs, the U.S. is likely to see continued performance gains in the coming year. Time will tell whether those gains will be incremental or a larger step toward gigabit speeds."

This is a very strong report and it shows that whether they want to invest in their networks or they have to because of increased competition, the big ISPs have gotten better. Going forward it's likely that they will continue to improve their offerings or risk losing customers to upstarts like Google Fiber or whatever new technology comes down the pike allowing people to forgo traditional providers.