What: Shares of Seagate Technology (NASDAQ:STX) rose 31.5% in July 2016, according to data from S&P Global Market Intelligence. At the same time, archrival Western Digital (NASDAQ:WDC) traded down 0.5%, and the S&P 500 market benchmark gained a modest 3.6%. Seagate's superior returns were triggered by a strong preliminary fourth-quarter report.

So what: In the fourth quarter, Seagate beat both analyst projections and its own guidance, with adjusted earnings of $0.69 per share on $2.65 billion in top-line sales.

In the press release covering the quarterly results, Seagate also announced a deep-ranging restructuring of the company. It had already introduced a 3% headcount reduction in an SEC filing at the end of June. The mid-July move expanded Seagate's payroll cuts to 14%, or approximately 6,500 employees.

Over the next two or three quarters, Seagate's production volume will fall from 60 million hard drives per quarter to less than 40 million units. In the interest of supporting its cost savings with stable margins, the company is turning down supply contracts for low-margin devices such as low-capacity laptop drives, putting it back into enterprise-class clients instead.

Seagate shares rose 22% the day of the announcement. 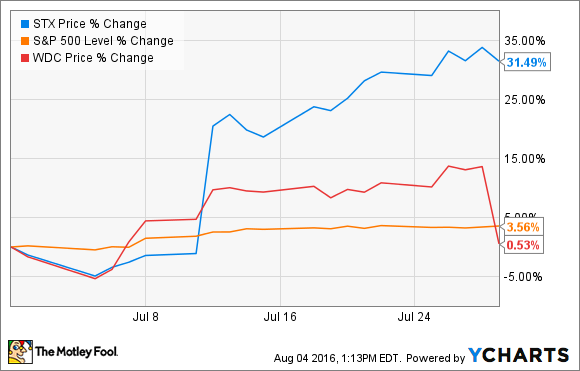 Now what: The solid earnings report and radical strategy shift unleashed a flurry of analyst upgrades and positive notes. This momentum drove share prices another 10% higher by the end of July.

But Seagate still has vexing questions to figure out. Solid-state drives have been delivering high performance at a premium price for several years, but plunging memory-chip prices and economies of scale have started to make SSDs more competitive for bulk data storage. Western Digital adjusted by picking up an established SSD leader, but Seagate is offering only a handful of SSD products while pushing the traditional hard-drive technology as far as it can go.

The July restructuring could have been a perfect opportunity to pivot in a new direction and throw more resources into SSD development. But management hardly mentioned solid-state storage in the press materials and earnings call, and I'm still scratching my head over Seagate's long-term intentions.

If the company ever comes up with a viable plan to join the SSD revolution, investors could enjoy a huge bounce from today's still-depressed prices. But until then, I prefer owning Western Digital in this space.