As a mostly regulated utility, there isn't much variation in Sempra Energy's (NYSE:SRE) results. So when the company reported a 94% decline in quarterly earnings in the second quarter, it was enough to make any investor scratch their head. Looking into the results, though, it appears that the earnings decline is not as bad as the numbers on paper suggest. Let's take a quick look at Sempra's quarterly results and see why this large decline in earnings isn't as bad as it sounds.

What immediately stands out in this quarters results is the large difference between adjusted earnings and GAAP earnings. That big discrepancy comes from two items: The sale of the Rockies Express Pipeline and releasing all of the uncontracted volumes held in the pipeline, and a tax adjustment related to utility rate changes. Releasing those uncontracted volumes in conjunction with the sale resulted in a $123 million loss and the tax adjustment was another $80 million loss. According to management, these are one time charges and shouldn't have any material change to the company's results going forward. The REX pipeline loss is why we saw such a large decline in the company US Gas & Power segment, and the tax adjustment impacted its California Utilities segment. 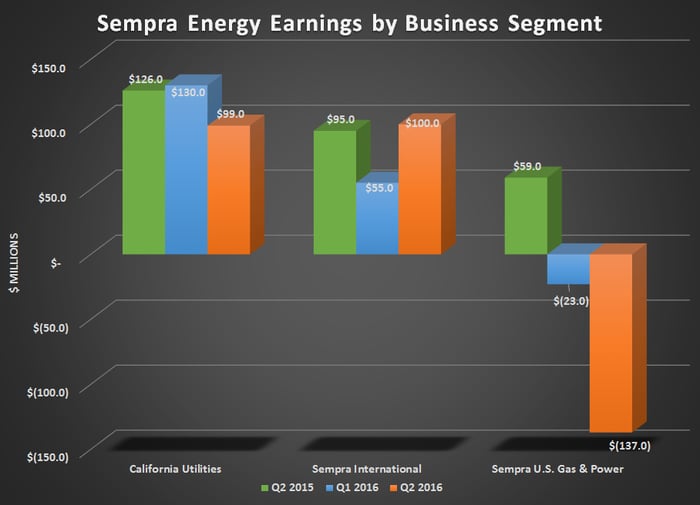 Despite blip in earnings this quarter, management reaffirmed its adjusted EPS guidance for the year at $4.60 to $5.00 per share.

A big point of concern for Sempra Energy as of late has been the Aliso Canyon natural gas leak and the impact it might have on the company. This quarter, the company disclosed that the costs related to the leak have totaled $717 million. From a financial perspective, the good news is that $679 million of it has been recorded as an insurance receivable and it won't cost much out of pocket for the accident.

On a more positive note, Sempra, through its investment in IEnova, won a bid from the Mexican Comision Federal de Electricidad (CFE) to build a 2.6 billion cubic feet per day marine natural gas pipeline that will connect Brownsville, Texas to Tuxpan, Veracruz. The $2.1 billion project will be developed by IEnova and Transcanada (NYSE:TRP). IEnova will be a 40% owner in the project that will come online in 2018. This makes for more than $4 billion in assets and projects currently under construction for IEnova.

The company also noted that it has purchased a 100 MW wind project in Michigan that will start up in the fall of 2016 and that its Cameron LNG facility has received approval to export natural gas to countries that are not already authorized under free trade agreements.

Aside from the typical stuff that you hear from management on these calls, CEO Debra Reed wanted to highlight the strategic decision to divest the REX pipeline:

Our decision to sell REX reflects an implementation of our strategy for the natural gas business to focus our investments around our anchor LNG assets where we have competitive advantages... We also decided to sell our Southeast utilities and TdM and redeploy the capital on assets that better align with our strategy and provide stronger long-term growth.

If you were to look at an asset map of Sempra, it's pretty clear that the REX pipeline was a bit of a stand-alone business that didn't really fit in the overall portfolio for the business. By redeploying the $440 million it received for the deal into its Gulf coast natural gas assets that compliment its Cameron LNG export facility or with other potential LNG projects like Energia Costa Azul or Port Arthur, it will likely generate better returns.

This quarter's less than awesome earnings result seems to be more of a bump in the road rather than some kind of underlying flaw in the company's business. Unloading the REX pipeline resulted in a pretty big hit, but it's a one time thing that shouldn't impact much long term.

The biggest concern for Sempra's future is the ability to access enough capital to pay for all of its potential investments in the next few years. The company has more than $19 billion in projects in what it calls its base growth plan, with another $11 billion-$12 billion in options on top of that. The company's regulated utilities business is a pretty solid cash cow, but it certainly isn't enough to cover all of this capital spending. The biggest thing to watch for is any deferred or delayed projects, that may be a sign that the company can't grow as fast as originally anticipated.