Warren Buffett once told investors that "when we own portions of outstanding businesses with outstanding managements, our favorite holding period is forever." However, finding stocks that deserve to be held forever can be tough.

In my opinion, Amazon (NASDAQ:AMZN) makes that cut for 11 simple reasons.

1. It's synonymous with e-commerce. Forrester Research estimates that the U.S. e-commerce market will grow from $338.1 billion in 2015 to $530.6 billion in 2020. Amazon controls 41% of that market, according to Slice Intelligence. Amazon is also the top e-commerce site in key international markets like the U.K., Germany, and Japan. That's why Alphabet chairman Eric Schmidt once admitted that "more than twice" the number of shoppers started product searches on Amazon instead of Google.

2. Its sales growth is impressive. Even after growing its annual revenues from $8.5 billion in 2005 to $107 billion in 2015, Amazon continues to post double-digit sales growth. Its revenue rose 31% annually to $30.4 billion last quarter, and analysts expect its full-year revenue to rise 25% to $133.9 billion.

3. The Prime ecosystem is taking more prisoners than ever. Research firm CIRP estimates that Amazon now has 63 million Prime members in the U.S. -- an increase of 19 million from last June. It also estimates that the average Prime member spends $1,200 on the site per year, compared to $500 for non-members.

4. Amazon locks in users with new services. For $99 per year, Prime members get discounts, free two-day shipping, streaming video and music, e-books from the lending library, cloud storage, and other perks. Members can also use grocery services like Prime Pantry and AmazonFresh for additional fees. Prime serves as a widening moat against potential challengers like Wal-Mart, which lacks that cohesive ecosystem of services.

5. Amazon Video is now the third largest video streaming site in North America after Netflix and YouTube, according to research firm Sandvine. Amazon's 4.3% share of downstream traffic is still much smaller than Netflix's 35.2% and YouTube's 17.5%, but it's more than triple its 1.3% share from three years ago.

6. It's taking over your home with Internet of Things devices. Whereas Google tethers users to its ecosystem through PCs, mobile devices, and cloud-based apps, Amazon is taking over their homes with Kindle tablets, Fire TV set-top boxes, Dash buttons, DRS-enabled appliances, and Echo smart speakers. These devices ensure that users keep ordering products from Amazon and remain tethered to the Prime ecosystem.

7. Its plans for automated logistics will boost margins. Amazon's North American marketplace business only had an operating margin of 4% last quarter, but that figure could rise over the long term as more advanced robots replace humans in its warehouses and drones replace delivery drivers.

8. AWS (Amazon Web Services) is the biggest cloud platform in the world. Last quarter, AWS posted 58% year-over-year sales growth, 135% operating income growth, and had an annual run rate of $11.5 billion. Its major customers include Netflix, Comcast, NASA, and the CDC. The unit had an operating margin of 25% last quarter, and accounted for 56% of Amazon's operating profits, making it the company's most profitable business.

9. The explosive growth of AWS has given Amazon steady profits -- something it lacked in previous years. Thanks to AWS, analysts expect Amazon's full-year earnings to soar 358% this year, and another 80% next year.

10. That projected growth rate indicates that Amazon's multiples are actually cheap at 189 times trailing earnings and 74 times forward earnings. A simple comparison of Amazon's P/E against its price shows that the stock has gradually gotten cheaper, as it rallied more than 40% over the past 12 months. 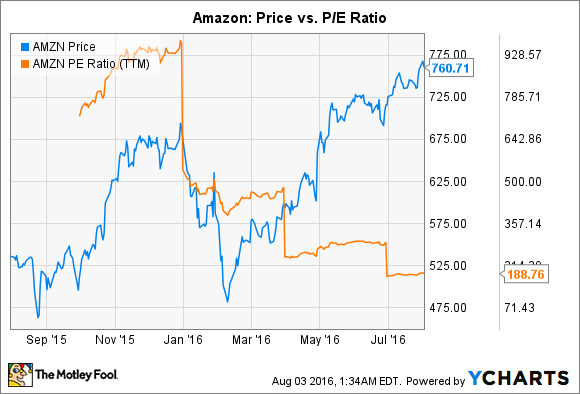 11. It has a visionary founder and CEO. I believe that Jeff Bezos is a visionary CEO -- like Jobs, Zuckerberg, or Musk -- who thinks in terms of decades instead of quarters. Under Bezos, Amazon evolved from an online bookstore into a superstore and a cloud giant which simultaneously disrupted the retail and IT markets. Under Bezos, I believe that disruption will continue as Prime and AWS expand their moats with new services that competitors simply can't match.

Is Amazon right for your portfolio?

Amazon can be a very volatile stock, and might not be right for everyone. But I believe that investors who are willing to ride out that volatility and buy additional shares on any big dips will be well-rewarded over the long term.