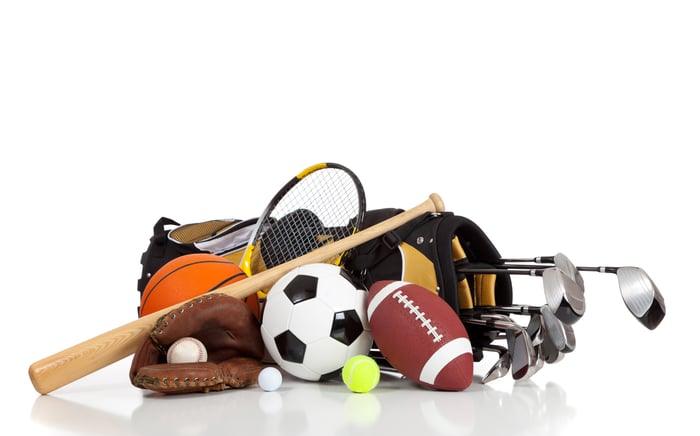 What: Shares of Dick's Sporting Goods (NYSE:DKS) jumped 13.8% in July, according to data provided by S&P Global Market Intelligence, after the company bought assets from a bankrupt competitor.

So what: Dick's Sporting Goods won an auction for assets of the bankrupt Sports Authority. The company is paying $15 million for the Sorts Authority name and intellectual property, including its website, loyalty program, and other customer files. It's also acquiring 31 leases for Sports Authority stores for $8 million.

This is a quick and cheap way for Dick's Sporting Goods to expand and the customer information could help the company expand both in-store and online.

Now what: There's no question that Sports Authority's bankruptcy, and now store closings, will be an incremental positive for Dick's Sporting Goods. So that is good news in and of itself.

If Dick's can create value from the assets it acquired, that would be icing on the cake, particularly from the acquired leases. But the downside risk should be apparent from Sports Authority's bankruptcy assets being available in the first place: Online shopping is eating into brick-and-mortar sales, something Dick's Sporting Goods is trying to overcome. Watch earnings over the next year to see if these new stores will add to revenue and profits, and if Dick's can overcome the challenges that faced Sports Authority.