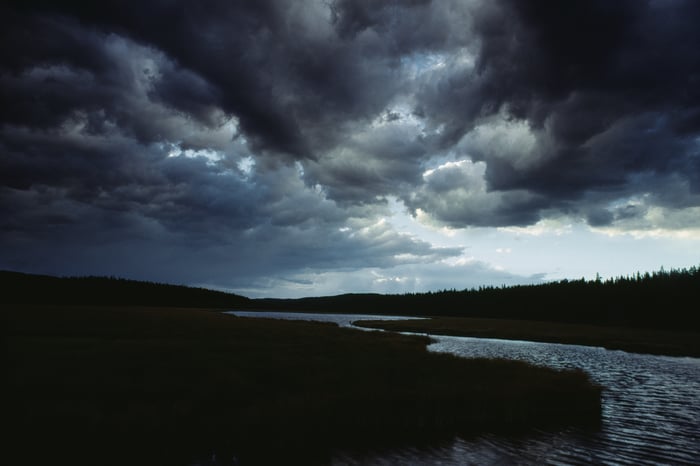 Gilead Sciences (NASDAQ:GILD) reported its Q2 2016 earnings on July 25, and the news wasn't good. Hepatitis C revenue -- Gilead's primary growth driver over the past two years -- sank by 20%. Gilead reduced its revenue expectations for 2016 by $500 million at the midpoint, guiding for revenue to fall by $2 billion or more from its 2015 peak of $32.6 billion.

Perhaps even worse, CEO John Milligan seemed to call the top during the earnings call. "Looking back," he said, "we can now say that in every country, the peak number of patients treated was achieved within two or three quarters of the launch of Harvoni," Gilead's main hepatitis C drug. (This and other quotes come from S&P Market Intelligence.)

Is Gilead doomed to years of stagnation and gradually declining revenue?

Gilead's hepatitis C lineup -- the blockbusters Sovaldi and Harvoni, along with the newly approved Epclusa -- remains incredibly strong. Despite competition from Merck's Zepatier and AbbVie's Viekira Pak, Gilead continues to treat 90% of U.S. hepatitis C patients. But things are getting tougher for a number of reasons.

First, let's consider the unique dynamics of the hepatitis C market: Sovaldi, Harvoni, Zepatier, and Viekira Pak are functional cures. Once patients have been cleared for treatment, they'll go through a dosage for between eight and 24 weeks, and then they're (usually) cured. There is no recurring revenue here because it's a one-and-done treatment. (That's not a complaint, by the way -- the fact that we might be able to one day totally eradicate hepatitis C is fantastic.)

Because of this, finding patients to treat gets harder over time. Generally, Gilead and the others started with the sickest patients, who were clamoring for care. Now, they'll have to persuade people who don't display symptoms -- which, according to the CDC, could be up to 80% of acute hepatitis C patients -- to get diagnosed and go through the trouble of pushing for treatment. Doing so will be no mean feat: Gilead's management estimates that about half of the 3 million people with hepatitis C in the United States are undiagnosed.

And the hits will continue. To quote Gilead COO Kevin Young, "There will continue to be a gradual decline in new patient starts, but an equilibrium will be eventually hit."

The other issue in the U.S. is revenue per patient. There are two main issues at play here: payer mix and length of treatment. Government payers such as the Veterans Administration and Medicaid pay less than commercial insurers for all treatments. It's just how things work. And as Gilead clears through a lot of the commercial market where it made its big initial splash, more and more of its patients will probably come from these discount payers.

Gilead also slashed prices to persuade commercial insurers to open up treatment to hepatitis C patients with lower fibrosis scores -- or, put another way, less sick patients. It's working: Last quarter, 57% of U.S. hepatitis C patients intending to treat with a Gilead drug had F0-F2 scores, with only 43% in the more advanced F3-F4 group. Compare that with the 50-50 split in Q4 2015 and majority F3-F4 in previous quarters, and it's pretty clear that the trend is heading in the right direction. The downside for Gilead shareholders? To quote Kevin Young, "The movement we are seeing is toward treating genotype 1 patients with low fibrosis scores and thus greater use of the eight-week treatment regimen for Harvoni" -- and away from the 12-week treatment regimen that earns Gilead more revenue.

But there's more to the story

Yes, the hepatitis C market will shrink over the long term as more people get treated, the process of identifying patients gets harder, and prices decline. But this is a market with plenty of long-term staying power. Consider that, of the roughly 150 million people estimated to have hepatitis C worldwide, fewer than 2 million have been treated. Without a doubt, there are still plenty more patients to treat.. And with Gilead's gross margin at 92% this past quarter, that's basically all money that can flow to the bottom line.

In the meantime, Gilead has a powerful HIV franchise, with 79% market share in the U.S. and 76% share among treatment-naive patients in the United States. It also has a strong pipeline with a number of cancer and NASH drugs in mid- and late-stage trials, and $25 billion in cash, short-term investments, and long-term investments that can be deployed to grow the company's pipeline through R&D or mergers and acquisitions.

While these opportunities are difficult to value, they are not value-less. Given that Gilead continues to trade at a ridiculously cheap valuation, I'll happily continue to hold shares. I believe that, with the various irons the company has in the fire, its best days are yet to come.

Are Gilead Sciences' Best Days Behind It? @themotleyfool #stocks $GILD Next Article
Current