Healthcare REIT HCP, Inc. (NYSE:PEAK) has had an interesting 2016 so far, to say the least. After reporting a surprising loss for the fourth quarter of 2015, shares briefly plunged to levels not seen since 2010, and have since rebounded -- and actually hit a new 2016 high as I'm writing this. Even though the stock has made back all of its losses and then some, there's still a lot of upside potential. With that in mind, here are three things that could easily catapult HCP higher.

The upcoming spinoff is a success

The most-significant news out of HCP this year has been the pending spinoff of its troubled HCR ManorCare assets into a newly created REIT, set to be completed in the second half of the year. So the first potential positive catalyst to keep in mind is if the spinoff accomplishes its intended objectives.

According to HCP's management, the spinoff will:

In the months and years after the spinoff, if it appears that these goals are coming to fruition, it could easily push HCP's share price higher. For example, if HCP starts getting more-favorable financing terms for acquisitions, it could boost growth and profitability. If you're interested, here's a thorough discussion of why the company has chosen to spin off its HCR ManorCare portfolio, and what it expects to achieve by doing so.

This one would actually be a positive catalyst for REITs, in general, and is the primary reason for the incredible performance of REITs such as HCP and rival Welltower during the past few months.

In addition, low interest rates make REITs, and specifically their above-average dividends, seem like more-attractive investments. With the 10-year U.S. Treasury paying just 1.5% per year, and many investment-grade bonds not paying much more than that, REIT dividends in the 4% to 7% range seem highly attractive and well worth the risk of owning the stocks. Therefore, more investors buy REIT stocks, creating upside pressure on the share prices. 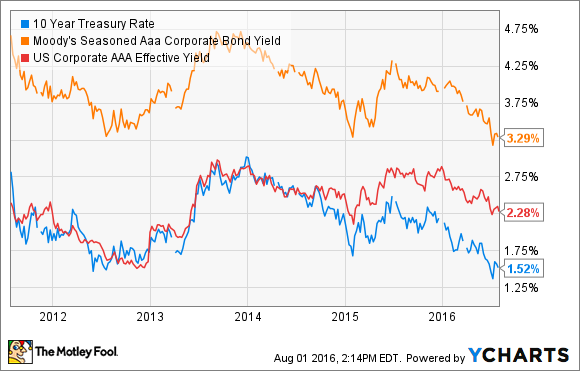 On the other hand, if investors can get comparable yields from less-risky bonds, it can entice people to sell their REIT holdings in favor of "safer" investments.

The bottom line is that if the current low-interest environment lingers for longer than people expect, it can be a strong positive catalyst for REITs.

I don't think anyone would argue against the statement that HCP has been a dividend rock star. A member of the S&P Dividend Aristocrats index, HCP has increased its dividend for 31 consecutive years and currently yields over 5.8%.

However, the upcoming spinoff creates some uncertainty here. During the first-quarter earnings conference call, HCP's management confirmed that the dividend policy of the newly created "SpinCo" will be set by that company's board. And, while the statements about the pro forma HCP's dividend were intentionally vague, it was mentioned that dividend growth is a consideration of management.

If after the spinoff, the combined dividends of the two REITs exceed HCP's 2016 dividend -- a $2.30 annual payout -- the streak of dividend growth will be alive for shareholders and could help shareholders breathe a sigh of relief and could be a positive catalyst for shares.

Is HCP still a good buy?

HCP has risen by about 50% since its February lows, so it's obviously not as much of a bargain as it was then. Even so, there is plenty of upside potential from here, and as I recently wrote in another article, it's still attractively valued compared to peers. And, while there are certain to be some growing pains once the spinoff happens, I believe that investors who have the time and patience to ride out any short-term volatility will be handsomely rewarded.