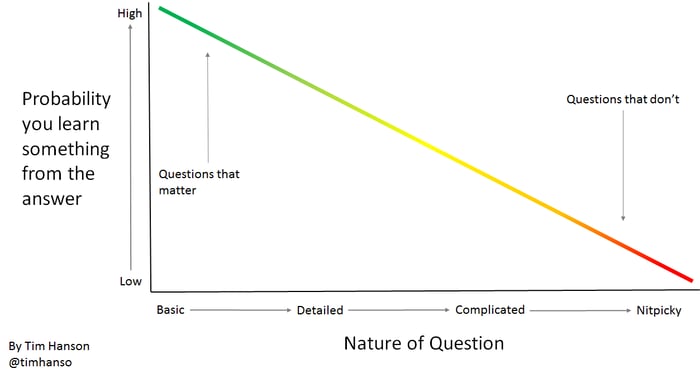 Basic questions are good questions. They matter. We learn from them.

Yet people often apologize for -- or don't bother -- asking them. What's more, we malign basic questions as dumb or stupid. Inquiries so simple, it's a waste of time to contemplate them. That has prompted the popular defense of the basic question, which is the aphorism "There's no such thing as a stupid question."

But there are stupid questions -- or at least questions that don't matter. These are questions people ask when there's little chance they'll learn something from the answer. They include leading questions, preening questions, and statements disguised as questions. And while they can sound harmless, they prevent us from gaining a better understanding of the world around us.

I asked those questions

Back when I was a junior equity analyst, I asked more than my fair share of questions that didn't matter. I would dial into a company's quarterly conference call and enter the Q&A queue intent on asking the most detailed, nitpicky question I could -- something along the lines of: "I noticed your cash conversion cycle has slowed by a few days sequentially. Could you walk me through what that says about the current demand environment and whether you project any weakness going forward?"

That looks and sounds like an intelligent question. But why did I ask it? The answer, to the extent there is one, would be immaterial to my analysis. A 10-year discounted cash flow model with a terminal growth rate -- or any other model, for that matter -- is not sensitive to such a short-term input.

Instead, I asked it to justify my presence on the call. I asked it to demonstrate publicly just how quickly and completely I had dissected the company's financial filings. And I asked it to prove how hard I was working. I did not ask it expecting to glean an insight that would lead to a better investing outcome.

Learn from the best

I didn't set out to ask questions that didn't matter, so where did I pick up the habit? From peers. From listening to other analysts. Asking those kinds of questions is a best practice in the financial industry. Complex, detailed, and fundamentally meaningless questions show off analysts' apparent knowledge and enhance their job security by reinforcing the misconception that investing is inherently esoteric and high-cost.

What's amusing is that companies not only entertain these questions, but answer them. Here's an example from Bank of America's first quarter 2016 call:

I was wondering about on the net interest income side if you could talk a little bit about, Paul, what kind of outlook we should think about for the core net interest income. [...] And you do get a day count help modest in the second quarter from the first 2, right? Doesn't that help?

The implication here -- that one extra day could have a meaningful impact on the long-term value of a bank with more than $2 trillion of assets -- is ludicrous. If your investing thesis hinges on some kind of leap-year effect, you are doing it wrong. But it was a sharp catch, and the question is asked and answered straight-faced on both sides.

Fortunately, there are a few CEOs who see through this malarkey. One is Steve Wynn, head of the eponymous hotel and casino company. On his company's third-quarter 2012 call, for example, an analyst asked Wynn to expound on how stable the economic situation in Macau would be over the next few months. Wynn's response was that he didn't know, because "that's not a question we ever deal with except during a call like this."

On the second-quarter 2013 call, that same analyst followed up with a question about go-forward 90-day market share. But Wynn exposed the farce of it all in his answer:

It's hard to give you -- to quantify this. I know we try all the time, but to tell you the truth, Robin, it's sort of a waste of time for all of us [...] It's the kind of super detail that seems to matter on these kinds of calls, but really amounts to nothing in the long run.

Like my question about the cash conversion cycle, the answer to a question about market share over the next 90 days is not material to any rational analysis of Wynn's long-term prospects. Wynn at that time was a company with an enterprise value of more than $20 billion, revenues of more than $5 billion, and plans to open a massive new resort in Macau in just a few years' time.

But the analyst sounded on top of things -- smart and observant, with a keen eye for detail.

Back in college, I had a professor who cut off any question that began with the phrase "Don't you think," explaining that no real question could begin with that phrase. Rather, he said, lazy students -- all of us, really -- use this construct to disguise preconceived notions as questions. What's more, these notions were usually ill-informed and a waste of time since we were barely more than teenagers.

This line of thinking crystallized for me when I read a prominent headline in The Wall Street Journal about a 15-year-old Bank of America shareholder (registration required to read). This girl is a remarkable investor. What sets her apart from most of the rest of us is that she attends the bank's annual meetings and votes her proxies. What's more, she asks questions of management. Good questions. Tough questions. Short questions.

For example, at the last go-round, The WSJ reported that when given the mic, she asked simply, "What is the bank doing to raise the share price?"

Is that a naive question? Is it a stupid question? Let's be honest: Most professionals would not ask that question. On one hand, that may be because it's curt and confrontational, and we might be looking to curry some kind of favor or investment banking relationship with the company. On the other hand, perhaps we consider ourselves too enlightened to think that a stock price can accurately reflect the underlying value of a business. But whether you believe in the efficient market or not, the fact is, stock prices reflect business values some 99% of the time. So, it's a good question. If a management team is creating value, then the stock -- setting aside times of dislocation and overreaction -- should mostly rise.

Bank of America's calls with professional analysts, however, are full of far less material questions. In addition to the leap year inquiry referenced above, here are some more gems from B of A's first-quarter 2016 call.

I'll focus my question on expenses, and then I'll get back in the queue, but I think outside of incentive comp expenses generally were better than I was expecting, and how much of that is the Simplify and Improve? And how much more do you think there is to do on some of these core expenses, I guess, number one?

This question doesn't matter for a few reasons. First, since this analyst opens by forfeiting his right to a follow-up, bank management can pretty much say whatever they want and go unchallenged. Second, he invites them to celebrate their own branded cost-savings programs. Third, he tells them the answer he wants to hear: that more savings are on the way.

And in terms of March, what can you -- just any color on what got better, what felt better, which areas of the business -- could you help on that?

This question doesn't matter because the analyst is basically asking the bank why it was so awesome over a one-month time period. Management may answer, but the answer is unlikely to be accurate unless they explain that it was due to chance.

Maybe just one ticky-tack question on the FDIC charge. It wasn't clear. Is that an annual expense? Or is that going to be quarterly at $100 million?

The analyst here is self-aware and admits this is a meaningless question before asking it, but plows ahead anyway. There is nothing significant about a $100 million expense, given the bank's $2 trillion balance sheet.

Questions, like most things, are subject to the Pareto principle: 10% of what you ask will get you 90% or more of what you need to know. The rest is self-indulgence.

The problem with self-indulgence

If the purpose of a question is to learn something you didn't know or extract information -- sometimes reluctantly -- from an interlocutor, then the more details you include in your question, the more substance you're inviting your counterparty to simply repeat back to you. For example, I used to go on the road quite a bit in my investment analysis work to meet companies' management teams. At the beginning, I used to ask questions like, "As value-oriented, business-focused investors, we put a lot of importance on sustainable free cash flows and rapid inventory turns that keep cash unencumbered. Can you talk about what you all do or don't do to operate your business with these metrics in mind?"

As you can imagine, every time I asked a question like this, I learned that the company managed to sustain free cash flow, that aggressive inventory management was a focus at all levels, and that the current stock price probably didn't reflect the underlying long-term value of the business. They told me what I wanted to hear because I had told them what I wanted to hear.

Now here are the questions I began to ask as I gained experience:

It was through a simple line of questioning like this that I learned a lot. For example, I learned that a certain Singaporean fast-food chain was propping up its profit margins amid rising food costs by secretly shrinking portions -- and that they thought this was a brilliant solution to their problem.

But as a long-term business-focused investor, I was horrified. Not only were they risking their brand if customers caught on to the deception, but it wasn't a sustainable approach. Should food costs continue to rise, the company couldn't keep shrinking portions. What they needed was what they didn't have: pricing power.

It was an insight that changed how I analyzed and valued the company. But had I asked "Don't you think portion-shrinking is devious and unsustainable?" they would have agreed with me. Not only would I not have learned anything, but I would have left with a distorted view of reality.

We learn more when we ask basic questions. Those are the questions that matter. They're short, simple, and meant to extract information. But because they're often perceived as stupid or discourteous, basic questions can be difficult to ask. Just take a look at the preamble an analyst recently put in front of the basic question of "What's your business model?" to Solar City CEO Lyndon Rive:

First one, Lyndon, a high-level question. So looking at it over the last couple of years, there's been a lot of moving parts. You guys want to retain assets. Now the focus is shifting a little, you are willing to sell maybe for price discovery of whatever it is, so you changed focus from growth to cost reduction. So my big picture first question is, what exactly is the business model of Solar City? And I have a couple of follow-ups.

It's a basic, important question. Why didn't he ask it without all of those qualifiers? First, asking such direct questions is hard and uncomfortable. Second, analysts who ask tough questions aren't allowed to participate in future conference calls. Third, contributing to the theater of the stock market pays better than being a reality check.