What: Shares of Herbalife Ltd. (NYSE:HLF) surged last month as the company reached a settlement with the Federal Trade Commission over allegations of being a pyramid scheme. The FTC announced on July 15 that Herbalife would restructure its multilevel marketing operations and pay $200 million for consumer redress. As the chart below shows, the bulk of the company's gains came on July 15, the day that announcement was made. 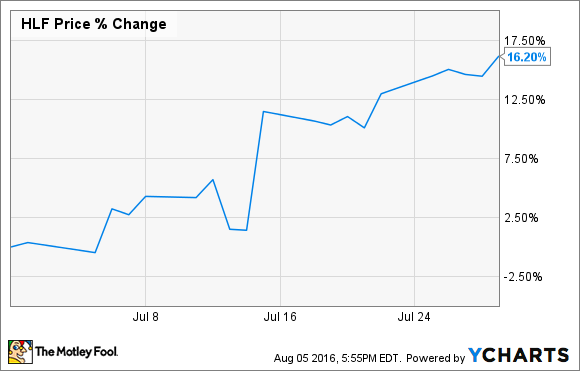 So what: Herbalife had been embroiled in a long battle with hedge fund titan Bill Ackman, who had shorted the stock and accused the company of being an illegal pyramid scheme, but the issue seemed to finally come to a head with the settlement with the FTC.

According to the agreement, Herbalife must pay $200 million, but it will not be considered a pyramid scheme. The FTC ordered the company to fundamentally restructure the business so that salespeople are rewarded for selling the product to customers rather than recruiting other salespeople. The nutritional supplement company will make other concessions as well, including hiring an outside monitor and making multiple changes to its operations.

The agreement was seen as a victory for Herbalife as Ackman, in an emotional crusade, had repeatedly called for the company to be shut down.

Now what: With the FTC decision behind it, Herbalife reported earnings on Aug. 3, though the stock was essentially flat after the report came out. The $200 million fine caused the company to report a loss, but after adjustments it turned in a per-share profit of $1.29, up from $1.24 in the year-ago quarter. It also boosted its full-year EPS guidance to $4.50-$4.80 from $4.40-$4.70.

Ackman has maintained his short bet against Herbalife, saying that the company has been shut down by the FTC without realizing it. The market, however, seems to have accepted the settlement as the final verdict in the matter and Herbalife said it wouldn't have agreed to the settlement if it couldn't carry out the demands. While Ackman may continue to make noise about the issue, investors can expect the company to return to business as usual.