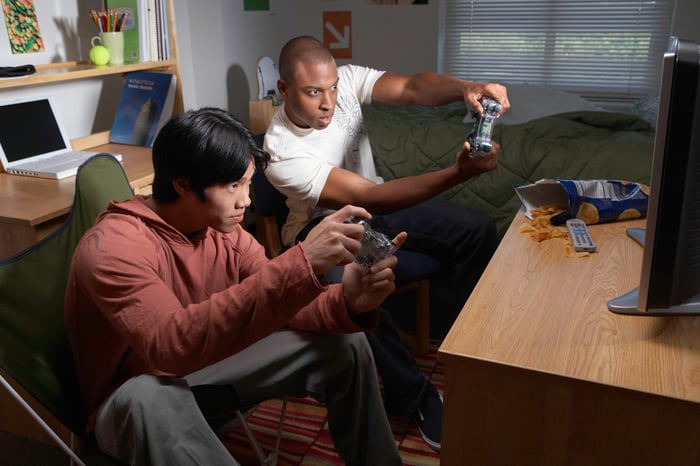 What: Shares of gaming retailer GameStop (NYSE:GME) jumped 16.4% in July, according to data provided by S&P Global Market Intelligence, as the stock got a Pokemon-related boost.

So what: It may seem counterintuitive, but the biggest driver for GameStop in the quarter was the hit release of Pokemon Go, even though it's a mobile title that contributes no direct revenue to the video game retailer. However, GameStop has been offering Pokemon-related discounts, and evidently, they've drawn customers to stores at a rapid clip. CEO Paul Raines said shortly after the game's release that some stores have seen sales double due to customers flooding in to purchase Pokemon merchandise.

While GameStop may enjoy a temporary boost from Pokemon Go's success and could even benefit from increased interest in the Nintendo 3DS releases of Pokemon Sun and Pokemon Moon later this year, the long-term competitive dynamics don't bode well for the company. Pokemon's transition to mobile devices shows that popular franchises can leverage smartphones to make money, reducing reliance on the devices and cartridges that GameStop sells. The boost in traffic will likely be short-lived as well.

Now what: The first peek into exactly how much Pokemon Go is affecting GameStop's bottom line will be seen on Aug. 25 when the company reports results for the quarter ended July 30. There may, in fact, be a boost in sales from the game, and if the upcoming Pokemon titles on the Nintendo 3DS are a hit, that momentum could continue.

But I wouldn't confuse short-term gains with long-term potential for GameStop's business. Games are moving to mobile devices and digital downloads -- that's what should worry investors long-term. This may not be a share pop with staying power and at the moment, doesn't indicate a way for GameStop to transition its business for long-term growth.