When Nike (NYSE:NKE) decided it was getting out of the golf equipment business -- including clubs, balls, and bags -- it took a lot of people by surprise. The company has invested hundreds of millions of dollars in its golf business over the past decade and sponsorships of Tiger Woods and Rory McIlroy alone cost Nike somewhere around $40 million to $60 million  annually. In fact, Woods, who signed a $40 million deal with the company in 1996, was the catalyst for Nike's entry into the club and ball business.

With club sales falling and interest in golf generally slowing, Nike has decided to focus on apparel and shoes. But there's more to it than golf's decline, and when you take a step back and look at it, the move makes all the sense in the world. It could even lead to Nike making more money on golf than ever before.

When Nike entered the golf business in a big way, it tried to do everything all at once. After Woods signed his five-year $40 million sponsorship deal, Nike clubs, balls, bags, shirts, and shoes were suddenly in every sporting goods store in the country. Nike Golf was on the map.

But as the last two decades have unfolded, some flaws in Nike's golf strategy have emerged, which explain why it makes sense to drop hardware and focus on golf apparel and shoes.

All three of these factors are driving Nike's decision to get out of making golf equipment, and it may be a good move for the company's bottom line.

As much as golf may appear to be a business with lots of money for club manufacturers, it's historically been a very tough business. Below is a chart of revenue and net income for Callaway Golf (NYSE:ELY) since 2000. As you can see, that revenue has been flat and profits have trended lower. 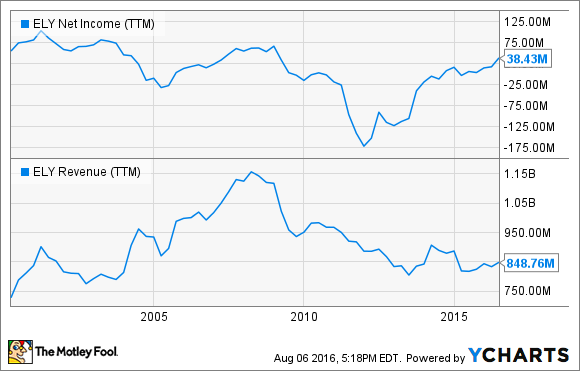 The challenges also go well beyond Callaway. Acushnet Holdings, which owns Titleist and Pinnacle brands and is preparing for an initial public offering, puts a positive spin on the industry but it even said sales fell from $1.54 billion in 2014 to $1.5 billion last year. Combined net income from 2011 thru 2015 was $22.9 million. That's right. One of the biggest names in golf averaged less than $5 million in net income over the past five years.

Both of these businesses include some apparel, but clubs and golf balls are their bread and butter. And it's clearly not as profitable a business as you might think. Nike doesn't break out its margins in golf equipment versus apparel, but it's likely the company can make just as much profit -- or more -- by cutting the equipment business out of the picture.

Leaving the golf equipment business won't be a huge deal for Nike long term. It generated $706 million in revenue in fiscal 2016, compared to $27.2 billion for the entire company. And, as I mentioned, the move may lead to a more profitable golf business overall.

What will be worth watching is whether or not Callaway, Titleist, Taylor Made, and other equipment companies will be able to generate more income from the reduced competition. In theory, they will be able to increase volumes, lower cost per unit in manufacturing, and even spend less on sponsorships with Nike out of the business. But that may be wishful thinking and this could continue to be little more than a breakeven business for investors -- something Nike found out the hard way.