Pacific Biosciences is growing more quickly than Illumina, which is struggling to overcome sluggish demand in Europe.

More than 7,500 of Illumina's gene-sequencing machines are installed worldwide, and that number dwarfs Pacific Biosciences' installed base of less than 200 machines. Illumina's success in capturing the lion's share of this market stems from its ability to innovate machines that are arguably faster, more accurate, and cheaper to operate, and those advantages have rewarded investors with surging sales, profit, and as a result, share prices. Meanwhile, it's been tough sledding for Pacific Biosciences investors. The company's sales have increased more slowly than Illumina's, and the company remains unprofitable. As a result, Pacific Biosciences' shares have lost 46% of their value since 2010, while the S&P 500 ETF has gained 93%. 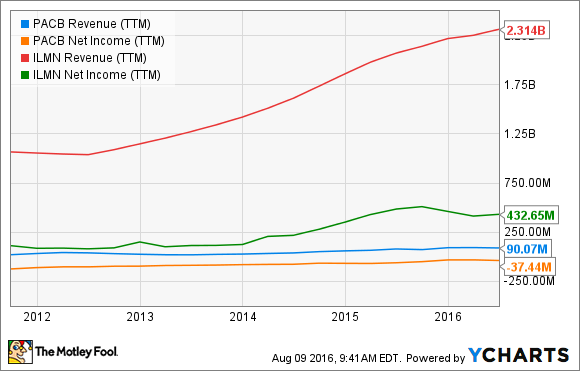 Illumina's management is blaming the slowdown on operational stumbles rather than competition, but the timing of European weakness coincides with the launch of Pacific Biosciences' latest machine, the Sequel. That could mean that Pacific Biosciences is making inroads.

The Sequel costs $350,000, or about half the cost of its predecessor, the RSII. A lower upfront cost, and long reads that are attractive to researchers, has resulted in orders for 49 Sequels in Q4, 30 orders in Q1, and 25 orders in Q2. To put that order pace in perspective, only 40 RSII machines were ordered in the entirety of 2014.

Importantly, orders for the Sequel have come from everywhere, including Europe, where Illumina is struggling.

On the company's second-quarter conference call, Pacific Biosciences' CEO Mike Hunkapiller said, "Europe has actually been an increasing source of strength for us with the Sequel, in terms of the sales that we've already made and the orders we've gotten, as well as the pipeline that we have." That's a stark contrast to Illumina's performance in the region.

Illumina is unquestionably the industry Goliath, and that's not going to change anytime soon. However, Pacific Biosciences is likely to grow more quickly than Illumina from here because it's growing off a much smaller base. This year, Pacific Biosciences' $16.3 million in year-to-date instrument revenue is up 44% year over year, while Illumina's product sales are up 7.7% year over year.

The potential for growth, however, needs to be tempered by the fact that the company remains unprofitable, and since it's not clear to me when that will change, Pacific Biosciences is riskier than Illumina. If you can tolerate profit uncertainty, however, Pacific Biosciences may offer a bit more pop to portfolios, at least until Illumina can show that it's reignited demand in Europe.