Melco Crown (NASDAQ:MLCO) has been hit hard by the decline in Macau's gaming market, even more so than competitors Las Vegas Sands (NYSE:LVS) and Wynn Resorts (NASDAQ:WYNN), both of which earn most of their revenue from Macau. It's suffered more than its competitors partly because it gets nearly 100% of its revenue from Macau, but there's more to it than that. Melco Crown is losing market share and recently reported second-quarter results show that the trends aren't looking good. 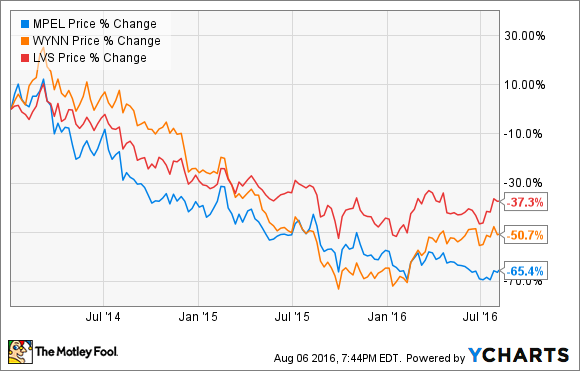 Headline numbers can often be misleading in the gaming industry. At Melco Crown, revenue was up 17% in the second quarter to $1.07 billion and operating income jumped 230% to $72.4 million. But the opening of Studio City, which skews full company comparisons, drove that increase. Beyond the headline numbers, investors should be looking at how Melco Crown's game play is holding up versus Macau as a whole. And the figures aren't good.

Below are the rolling chip volume (VIP play), mass-market drop, and slot handle for Melco Crown in the second quarter. All are measures of gaming volume and don't include the luck factor, which can cause revenue to vary from quarter to quarter. And they should be compared to the 9.2% decline in Macau gaming revenue overall in the second quarter.

Data source: Melco Crown second-quarter earnings release. Note: Studio City opened in Oct. 2015, so there is no year-over-year comparison. It also does not break out VIP tables.

You can see that Melco Crown is losing market share, which isn't a good sign. This could be for a number of factors. The declining VIP market is causing companies like Wynn Resorts to focus more on mass-market players, which could be drawing customers away from Melco Crown.

More concerning could be the impact of new properties in Macau. Galaxy recently opened an expansion, Studio City is open, and before the year is out, Wynn Resorts and Las Vegas Sands will open new properties near Melco Crown's City of Dreams and Studio City. If we're starting to see the cannibalization of Macau's existing properties, it could lead to a long, slow decline in profitability for Melco Crown.

Investors could point to the potential uptick in gaming revenue in the back half of the year as a bullish sign for Melco Crown. The increase in supply in Macau, however, will likely more than offset any increased demand. And without any new casinos on the horizon, it could be a downward trend for the foreseeable future for Melco Crown. And that's not a good thing for any company in gaming.