What were the details from the report, and what should investors do with the information? Let's take a look.

Details of the report

Total vehicle sales for Tata Motors were up 7% year over year in July. This includes an 8% increase in sales within India and a 6% increase in exports over last year's figures. Fiscal year-to-date, sales are up 7% from the same time last year.

What is driving the growth? Within India, auto sales were higher because of strong demand for the rollout of the new Tiago economy car. Passenger cars rose in total by 43%. The company also sells various commercial vehicles, and total sales were down 2% from last year. Tata attributed the slowdown to heavier-than-normal monsoon rains and a slowdown in replacement purchasing. Cumulatively, sales of commercial vehicles are up 7% fiscal year-to-date.

With the Jaguar and Land Rover divisions, new product launches and a rebound in auto sales in key markets are the big story. Land Rover's new Discovery Sport has become the company's best seller in the past year, with sales up 70%. Jaguar's first ever SUV, the F-PACE, was released in the United States in May and is already by far the best selling vehicle year-to-date. The new XE compact sport sedan, also newly released, is the second-best seller behind the SUV.

Sales increases came mostly from the U.S. and China, but the European market for Jaguar and Land Rover are also showing signs of life so far this year. The Indian business has also been strong, primarily because of increased government budget spending to prop up infrastructure. Are the upward trends sustainable for Tata Motors?

For the remainder of the year, Tata Motors' strategy is to continue supporting the new model rollouts. In the Indian business, production of new municipal and passenger vehicles is running 17% and 9% higher than the same period last year, respectively. This offsets a 4% decline in light commercial vehicles and a 61% decline in SUVs, although that is by far the smallest division of the company.

The picture is much the same for Jaguar and Land Rover. Jaguar, especially, is ramping up new sales. With the F-PACE now only a few months old, it is already a best-selling vehicle. This is astonishing, as the SUV is just now becoming available is some markets, including China. The full rollout in China won't be completed until the end of August, so sales figures including that market won't be available until later in the year..

Tata Motors is also getting a big boost through the beginning of next year with the elevated spending from the Indian government to boost infrastructure updating and support India's fast-growing middle class. While most of the world is coping with slow growth, India has been a bright spot, with GDP expanding north of 7% a year.

Even if sales start to slow from the Jaguar and Land Rover businesses, the ramped-up production and continued growth in sales to support it from the core Indian business should help the company to grow.

In line with business results as of late, Tata Motors stock is up over 30% this year. Should investors buy in? 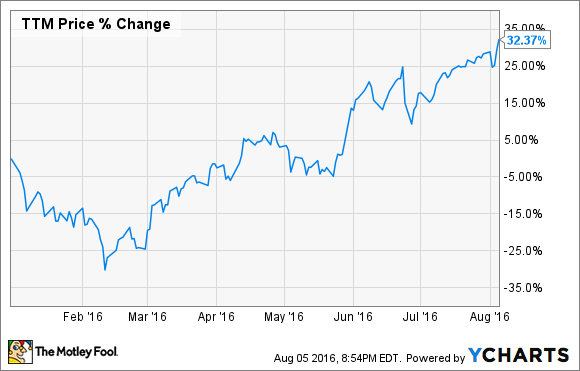 Even with the run-up in shares, the company sports a PEG ratio of 0.4. The PEG ratio measures the value of a current stock to its expected future growth. Anything less than 1.0 is considered undervalued.

The automaker is in a unique position, with one foot in the developed world selling luxury vehicles and another in one of the fastest growing developing countries selling economical and commercial vehicles. As sales continue to recover from their slump last year, I think Tata Motors stock is worth a look.