A subset of investors appear to have taken a dim view of Huntington's recent merger.

Why have investors turned against Huntington Bancshares? Image source: iStock/Thinkstock.

It's always good when investors are interested in your stock -- unless the investors are short-sellers, that is, who profit when it falls. This is the predicament Huntington Bancshares (HBAN -0.69%) finds itself in, as a wave of investors have bet against its stock.

How do you short a stock?

Selling a stock short isn't intuitive. To do so, a short-seller has to borrow shares in a company from an existing shareholder. The short-seller then sells those shares, with the hope of buying them back later at a lower price, at which point the shares are returned to the original shareholder.

You can argue both for and against short-selling, as its value to the broader market and society is dubious, but one benefit to the practice is that it allows investors to gauge sentiment toward a stock.

Huntington Bancshares is near the top of its peer group for both metrics. According to YCharts.com, investors have shorted 67 million shares of its stock. That equates to 8.4% of its outstanding share count. This ranks Huntington Bancshares third among regional banks, behind only People's United Financial and New York Community Bancorp.

Why are investors shorting Huntington?

What's behind the pessimism? It's tempting to think short-sellers have zeroed in on the challenging environment facing banks right now. Low interest rates combined with higher regulatory and compliance costs are suffocating profits across the industry.

On top of this, low energy prices have translated over the past year into higher loan losses. Analysts have also expressed concerns that the auto market is overheated, which would impact Huntington, given the bank's emphasis on underwriting car loans. 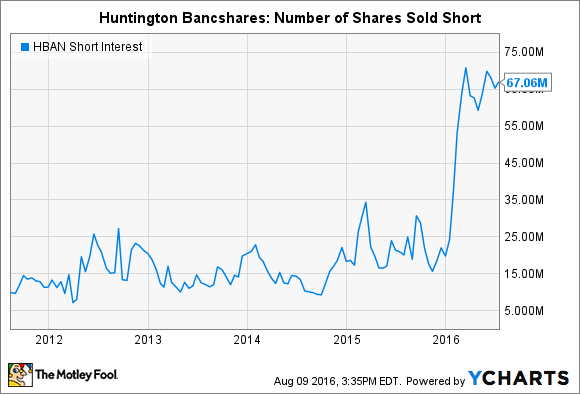 The answer to this riddle is that short-sellers seem to have taken a dim view of Huntington's merger with FirstMerit (FMER), a $26 billion bank headquartered in Akron, Ohio. The deal was announced in January, received regulatory approval from the Federal Reserve in July, and was completed on August 1.

The combined institutions will be the largest bank in Ohio based on deposit market share. It will strengthen Huntington's position in its core markets in Ohio, Michigan, and Pennsylvania, while expanding the bank's presence to Wisconsin and Illinois.

This combination will create a regional bank with strong market share, an enhanced portfolio of industry leading products and services, scalable infrastructure, added customer convenience, and a shared track record of award winning customer service that will add value for all our collective customers, communities, colleagues and shareholders.

It's not that short-sellers necessarily disagree with Steinour, but it's worth noting that Huntington paid a pretty penny for the deal, valuing FirstMerit at 1.7 times tangible book value. That equates to roughly double the 37% premium Huntington's shares trade for. There are also the added costs associated with the merger, in addition to the omnipresent risk that the integration of the two companies won't go as smoothly as planned, and that will weigh on Huntington's results in the foreseeable future.

In sum, if you were wondering why Huntington has piqued the interest of short-sellers, this merger appears to be the reason.