When internet bank BofI Holding, Inc. (NYSE:AX) reported its fourth quarter, investors were rewarded with more of the same steady, strong growth that it has delivered for years. Earnings were up 22%, EPS increased 18%, and the bank's portfolio of loans, leases, mortgages, and deposits all increased by double digits.

By most any measure, BofI delivered a wonderful quarter, and shareholders were rewarded with a nice 10% bump in the share price. Through Aug. 10, BofI's share price is up almost 13% since earnings were announced. And while a 10%-plus increase is great, BofI's stock price hasn't reflected the company's strong growth over the past year and a half: 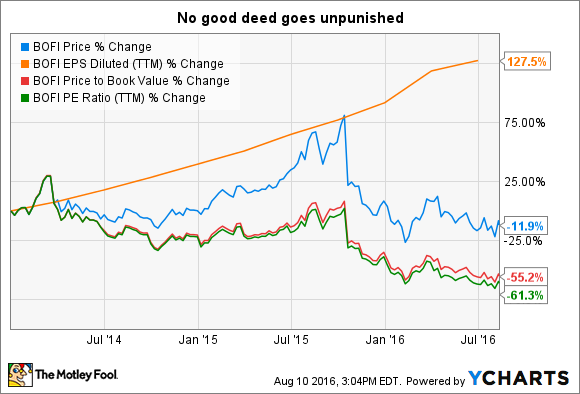 So what gives? In short, it's the shorts. As of this writing, almost 39% of BofI's available shares are sold short, but there could be signs that the short thesis is unraveling. Let's take a closer look at BofI's Q4 and fiscal-year 2016 results, as well as what's happening with the short case.

Another quarter of solid growth

Keys behind the results setting up future growth

One of the big drivers for earnings over the past two quarters has been BofI's partnership with H&R Block. In 2015, the two companies reached an agreement for BofI to acquire the company's banking business, which it would operate. This past tax season was the first under this agreement and was the key driver behind the huge growth in BofI's non-interest income in its third and fourth quarters.

But BofI management isn't just looking to leverage the deal with H&R Block during tax season. Part of the agreement gives BofI exclusive right to offer H&R Block's customers other products such as IRAs, and it is working to integrate its systems with those of H&R Block to more seamlessly support its ability to cross-sell.

BofI also made another investment in diversifying and growing its business lines during the quarter, having acquired the business leasing division of PacWest Bancorp's Pacific Western Bank in April. That acquisition included $140 million in equipment leases that pay an average of 7% interest and are expected to be accretive to earnings within one year of closing. CEO Greg Garrabrants said on the earnings call that this business is expected to generate between $80 million and $100 million in new leases on an annual basis.

Garrabrants also pointed out that BofI originated $33 million in prime auto loans in the fourth quarter, an 81% increase from last year, resulting from expanded indirect distribution and increased marketing and strategic partnerships in auto lending.

On Oct. 13 last year, a former junior auditor named Matt Erhart filed a lawsuit against BofI, alleging that he had been fired for disclosing to regulators what he believed to be wrongdoing by the bank. The wrongdoing Erhart accused the company of goes back more than a year and a half, according to Garrabrants.

Since that time, literally dozens of accusations have been made against the company, primarily in articles written by anonymous authors and posted on various websites. The list of accusations, on the surface, is daunting:

There are a lot more that I'm not going to bring up here. Spend a half-hour online and you'll find them, though it will take hours to read them all.

BofI management has -- as expected -- staunchly defended the company, calling the accusations spurious. Of course, there's nothing surprising about that, as any CEO will defend his company against allegations, whether they end up being proved true or false. However, consider Garrabrant's statement on the earnings call:

One of the world's largest law firms conducted an independent investigation and found his allegations to be without factual basis and cleared management of the alleged wrongdoing. Subsequently, the bank has completed two record-setting fiscal years, closed two acquisitions that both required regulatory approval, and successfully completed multiple OCC and Federal Reserve regulatory examinations.

... The performance of our business has not been impacted based on today's outstanding results. The bank is in strong regulatory standing with no enforcement actions, has not been fined a single dollar by any regulatory agency, and has not been required to modify its products or business practices. Additionally, we do not foresee any further impact to the underlying business as a result of the frivolous lawsuit and the short seller hit pieces.

And while that doesn't guarantee that BofI is completely free of any wrongdoing, it's just hard to imagine that BofI is guilty of what it has been accused of after all of the regulatory scrutiny that it has undergone since Erhart made his first accusations. Furthermore, regulators found no merit in his claims, and he wasn't awarded whistleblower status.

There's even more. BofI filed a motion requiring Erhart's attorney, Carol Gillam, to disclose her communications with short sellers, the media, and other third parties, and the court approved the motion. The findings were concerning. Apparently, Gillam provided media members and short-sellers with court filings before they were made public, and also with confidential BofI information. From Garrabrants:

The shocking evidence shows Gillam providing BofI confidential information she apparently obtained from Erhart in The New York Times, as well as communicating with a number of short-seller hedge funds and sending celebratory emails about the stock price decline following the filing of Erhart's complaint.

And while that in and of itself doesn't clear BofI of any wrongdoing, it does call into question Erhart's attorney's credibility, as well as further question Erhart's motives. Erhart has also admitted to destroying documentation that BofI could have used to defend itself, further weakening his argument that he was acting as a whistleblower.

What to make of it all

As things stand, there seem to be numerous holes in the short thesis against BofI, when considering the lack of action by any regulatory agency, Erhart's failure to obtain whistleblower status, regulators' lack of action on the information he provided them, an independent investigation by one of the world's biggest law firms that found no wrongdoing, and now serious concerns about connections between Erhart's attorney, the media, and short sellers.

At the same time, BofI's business results have continued to excel across multiple revenue streams, and the bank continues to take steps to grow its product lines in lending, investing, and deposits, leveraging its low-cost internet-only model to drive solid profits.

Yes, there remains risk. Any large company is bound to have something happening, whether management knows about it or not. But BofI has undergone significant regulatory scrutiny over the past year-plus and come out with flying colors. Eventually there will be resolution to the Erhart case, and if the court finds in BofI's favor -- which seems increasingly likely -- the short thesis against BofI would suffer a major blow.

If that's indeed the outcome, patient shareholders could benefit from the mother of all squeezes, as the shorts race for the exit.