The natural gas refueling expert reported strong growth in several key metrics, while also continuing to drive down expenses and strengthen the balance sheet. There's a lot to like here.

So what: Clean Energy delivered another strong financial and operating performance, handily beating Wall Street analyst estimates. Analysts were expecting the natural-gas-for-transportation leader to report a loss of $0.14 per share in the quarter, but the company delivered a $1.5 million profit, which works out to $0.01 per share. This was after delivering a profit in Q1, as well as a profitable fourth quarter of 2015, when adjusted for a non-cash loss related to cancellation of a debt agreement.

There's more. Here are some of the highlights:

Clean Energy also made some big improvements in its balance sheet so far this year. The company had more than $572 million in debt to start 2016, with $150 million of that due before September. As of July 30, the company had paid off all of its 2016 debt obligations, while retiring some of its 2018 notes, as well, reducing its total indebtedness to $406.4 million, with no major maturities until 2018.

Now what: Even after today's big bounce, Clean Energy shares are still well down from prior highs as the market continues to vote on the company's prospects based on oil prices: 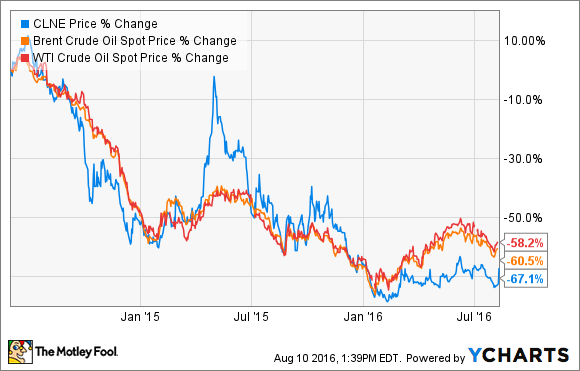 This is an excellent example of when correlation is not causation.

Yes, low oil prices aren't good for Clean Energy Fuels, because it cuts into the price advantage that natural gas provides. But even as oil prices have fallen, Clean Energy's steady volume growth has proven that there is still demand, and a purely cheaper price isn't the only driver behind natural gas, which produces significantly fewer emissions and particulates than gasoline and diesel fuels.

When factoring in the significant improvements in the balance sheet, sustainable reductions in capital spending and expenses, stronger margins, and a steady stream of growth, it's pretty easy to argue that today's Clean Energy Fuels is a better, stronger company than it was when the stock price was much higher.

Eventually, Mister Market seems likely to catch on. The question is, how long will it take for that to happen?

Why Oil and Renewable Energy Stocks Are Soaring This Week